In the US, after the initial V-shaped basing effect of the re-opening, we have moved into a more steady state uptick in output and growth. Having seen the data since June, I believe we exited recession with the re-opening and are now far enough into the recovery to begin to take a longer-term view.

The economic picture is better than expected. Even the Fed thinks so, as they have lowered 2020 year-end unemployment forecasts and raised GDP forecasts. And so, while there were initial jitters about the long-term outlook as traders came back from the summer holiday in early September, markets have reacted positively as economic data have come in subsequently. And now, we are almost completely through the turbulent September/October timeframe on the economic calendar.

Here’s the problem though.

While production in the US is humming along and many are being re-employed, there is still a torrent of new jobless claims every week. And many are dropping out of the workforce, as they fall through the cracks regarding counting unemployment in the US government’s statistics. This is one of two factors I see potentially imperiling the U.S. recovery.

For example, the US Department of Labor released this past week’s jobless claims number, stating: 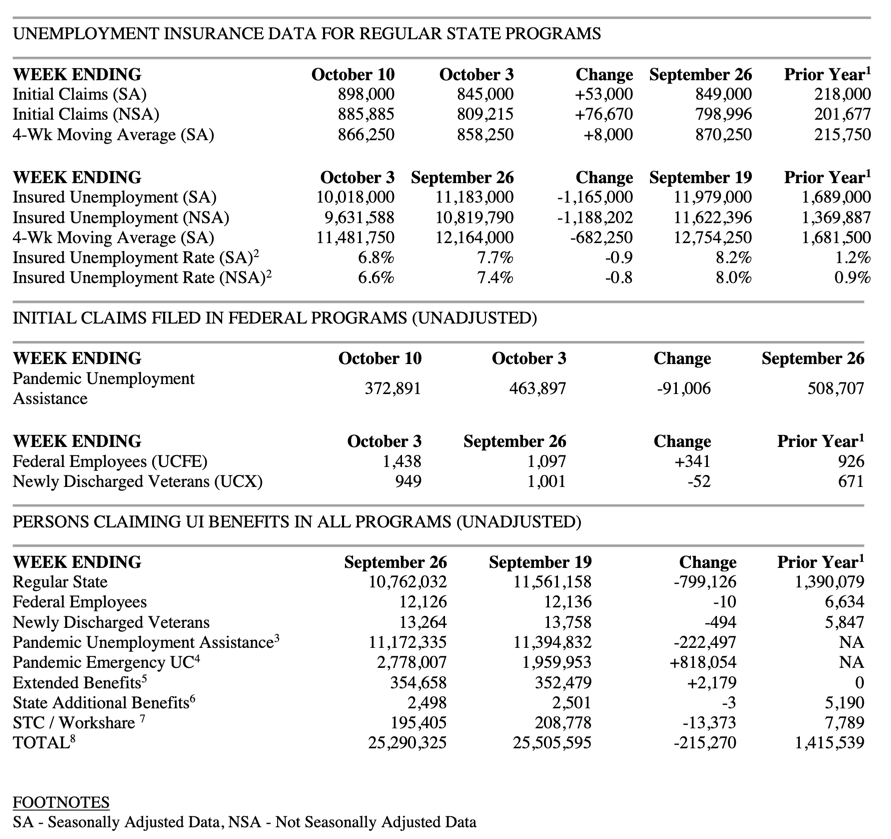 That’s an ugly report. It’s one week’s numbers. But, during the Great Recession, average initial claims peaked at 659,250 in March 2009. And so, we are much higher here seven months out from the initial US lockdown. Claims are not just still running at close to 900,000 but now also rising slightly, just as coronavirus cases have started to spike again.

In a reasonable worst case scenario, the third coronavirus wave happening this Fall could keep initial jobless claims elevated while re-hiring stalls. Without a stimulus safety net, consumption growth would decline or reverse into a decline. Stimulus talks at the Federal level are now likely dead. And so, we face a fiscal cliff on December 31 when Pandemic Unemployment Assistance is due to run out for the 11 million people still receiving benefits through this program.

Dion Rabouin of Axios had some interesting stats in his morning newsletter today. Let me quote him:

The big picture: During the Great Recession the number of people not in the labor force increased by an average of 0.12%, or 96,000 people, per month, according to an Axios analysis.

The takeaway: The unemployment is worse than the headline figures would have you believe because labor force participation rates have declined markedly. I have been saying I expect the unemployment rate to rise because it did so until October 2009 even after the jobless claims began their decline from March 2009.

The title of this post owes to what I wrote a week ago, namely this:

I am, therefore, taking a wait and see approach, watching for signs of credit distress or a surge in jobless claims. Yesterday, I focussed on the risks. But absent those two outcomes – credit distress and a jobless claims surge – I now lean towards believing Q4 2020 will see a ratcheting down of numbers but not end in a negative print. The biggest variable for the advanced economies is the next wave of coronavirus and consumer and government policy reaction to it, in the US and in Europe.

We now have the first signs of a claims surge. So, that’s disappointing. But still one week’s data.

After hitting a record high in the second quarter, the number of U.S. corporate ratings downgrades fell to its lowest level since Q4 2018, according to S&P Global Ratings.

By the numbers: S&P lowered 107 U.S. corporate issuer credit ratings in the third quarter — 74% fewer downgrades than in Q2, as upgrades nearly doubled to 43.

JPMorgan Chase CEO Jamie Dimon was openly musing about a potential double dip recession on his earnings call on Tuesday. And that makes sense if you look at these credit numbers. What they’re telling you is that the recession ended, resulting in a notable relief of credit stress. So if the economy turns down again, it would be a new recession. And the declining credit stress S&P Global is pointing to would turn up, acting as a canary in the coalmine for us – a warning sign of worse to come.

The business cycle and credit, defaults, and bankruptcies