While the US economy has decelerated enough since mid-2015 to put me on recession watch, it has not reached the point of recession. Moreover, the data do not indicate a recession is in the offing in the near-term. Rather, a combination of policy error and exogenous shock make a recession a reasonable worst case scenario for 2016. This is the case I have been making. But below I want to add some comments from Gavyn Davies and Tim Duy on that score in support of this view.

Last week, I described a business cycle like this: “Consumer spending makes up about two-thirds of the US economy, thus driving the long-term rate of economic growth more than any other variable… jobs are basically income that supports consumption and a specific growth path. And the rate of change in job formation is a leading indicator of economic growth. Now, over the short- to medium-term, if the growth in employment and income stalls enough or even falls, the ‘shock’ to income growth causes producers to re-calculate, reduce production and purge inventories.” And in some cases, this shifts us into a stall-speed economy, a mid-cycle pause like 1985 or 1995. In other cases, an additional shock from the credit sector is large enough to cause recession. What people are trying to figure out right now is whether we are entering the terminal phase of this cycle or whether re-acceleration of growth is possible.

I have yet to close the door to the Goldilocks mid-cycle pause scenario that sees re-acceleration of growth beyond stall speed as new areas of the economy take the growth baton from energy. At the same time, I believe the decline in energy capital expenditure and in job formation growth is pronounced and long enough to have the hallmarks of the end of cycle dynamics. And while this downshift could take a long while to play out, the downside risks become greater if policy errors that exacerbate the fall in credit and employment creep in.

Energy really has been a major player in this cycle’s growth dynamic. Look at this chart from the Economist on capital expenditure ex-energy for example. if one excludes energy and materials, global capex has been flat since the crisis. And the boom in energy and materals investment owes much to the lingering effect of the commodities boom, which ended in 2011, and the development of shale oil and gas. Now that the oil price has plunged, many energy investment projects have been cancelled.

Phillip goes on to speculate why capital expenditure hasn’t risen. And his commentary has the eerie feel of Japanese-style secular stagnation dynamics: high private debt, slow growth, weak capital investment growth. That’s not a scenario which is bullish for shares, by the way. But the larger point here is that it suggests potential output growth in the US is weak. And given the inventory drawdown that has caused recent weakness in output growth, the US economy is more vulnerable to policy error that causes recession.

But what about the argument that we are in recession or on the cusp of it? The Atlanta Fed’s GDPNow number is tracking 0.7% growth for Q4 2015 and there are visible signs of weakness in this quarter as well. It is not inconceivable that one of these two quarters or both end up as statistically negative on GDP when all is said and done. But two quarters of negative GDP prints do not a recession make. We need to see a broad-based economy-wide draw-down in employment, output, and wages to see a recession. And we simply aren’t there yet. Look at what University of Oregon economist Tim Duy is saying, for example:

I direct you to my fellow Oregon economist Josh Lehner, who correctly notes that in comparison to past recessions, the decline in manufacturing activity is not well disbursed across the sector. My version of Josh’s chart: 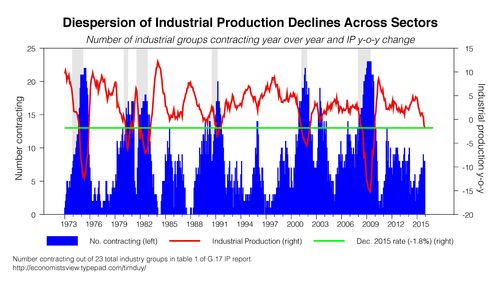 None of that sounds like a recession. Moreover, prior recessions happened coincident with a sustained year-over-year increase of +50,000 jobless claims. Right now, jobless claims are running below year-ago levels. And I would need to see them at least rise to year ago levels at 300,000 by March to believe a recession could even begin. remember, recessions need to include broad-based economy-wide hits to job formation. And nothing in the claims data says this is occurring.

It is true that much of the weakness in the nowcast is identified by economic variables that relate to the industrial sector. But these variables have, in the past, been very closely correlated with activity in the economy as a whole, and are therefore usually among the best indicators of overall activity. It is dangerous to ignore weakness in these industrial variables that persists for a long period, which is what is happening now.

That’s Gavyn’s view. And it’s not clear the Fed share’s it. We will see. But the nexus of policy divergence, a strong dollar forcing China’s hand on currency and the slide in oil prices makes a continued Fed tightening cycle extremely dangerous. The market’s bears are telling the Fed this. And if the Fed doesn’t listen to the bears, they are going to murder Goldilocks in her sleep and rip the house to shreds. Then we will be in recession.