Seven latest developments in Venezuela – a crisis in the making

As a followup to our recent discussion on Venezuela, here are the latest developments:

2. Oil exports have fallen to the lowest level since 1985. A great deal of the oil the country does export is shipped to China to cover the billions of dollars worth of loans – see story.

3. Government bonds have sold off sharply in January, with long-term rates now above 15%.

4. According to the central bank, core inflation is running at close to 60%, although given the shortages it’s difficult to measure. 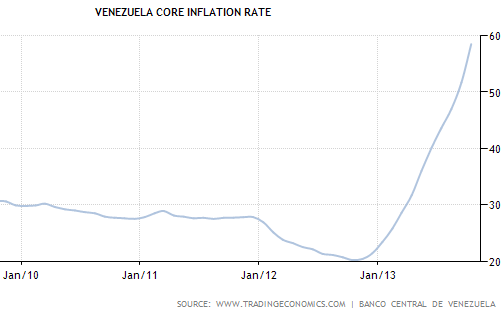 5. Dollar debt to the private sector is now over 60% of FX reserves  – see story (in Spanish).

The Economist: – Venezuela is running out of dollars to pay its bills. Although payments to its financial creditors of around $5 billion this year do not appear to be at risk, the country’s arrears on non-financial debt are put at over ten times that sum. These include more than $3 billion owed to foreign airlines for tickets sold in bolívares, and around $9 billion in private-sector imports that have not been paid for because of the dollar shortage. “Under the current economic model, and with this economic policy,” says Asdrúbal Oliveros of Ecoanalítica, “this [debt] looks unpayable.”

7. The country’s sovereign CDS volume has picked up as traders smell profits, and the spread hit a new high. This is what a crisis in the making looks like. 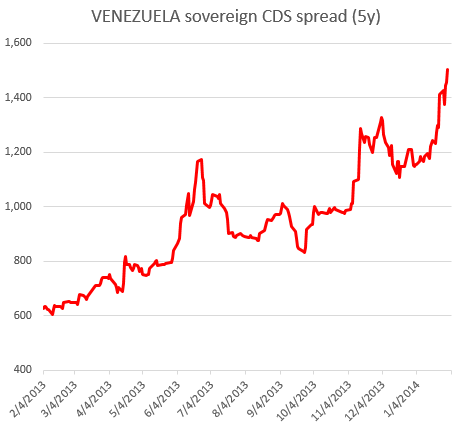 As labor force participation declines, should the Fed tweak its forward guidance?

Venezuela: Taking it to the streets in Caracas