It may be something symbolic such as a small rate cut or possibly a more substantial move such as a new LTRO program (discussed here), but the European Central Bank will be forced to loosen monetary policy in the near future.  Here are the reasons:

1. Liquidity:  The ECB’s (technically the consolidated Eurosystem’s) balance sheet is stll declining – down 28% since the middle of 2012. Excess reserves of the euro area banks are down nearly 80% over that period. 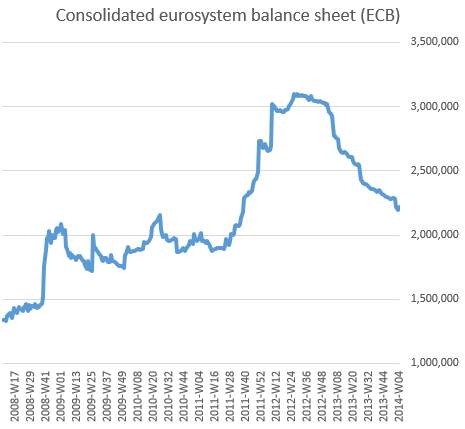 4. Disinflation:  The euro area’s price index growth is at the lowest level since the Great Recession and significantly below the ECB’s target. Moreover, the growth rate seems to be deteriorating. 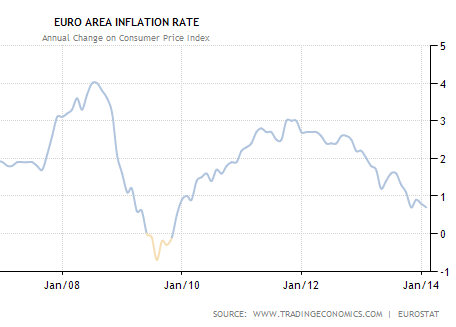 Furthermore, this disinflationary trend is not limited to the Eurozone periphery nations. Even Germany is showing signs of a slowdown in its inflation rate. 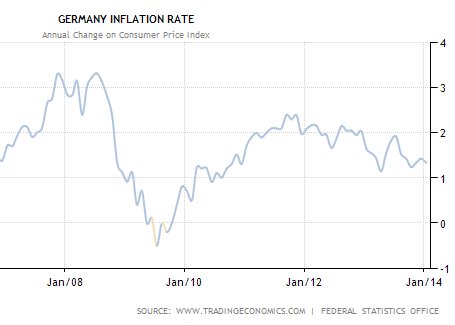 The last time Mario Draghi spoke on the topic, he hinted that this extraordinarily low inflation rate is an aberration. But that explanation is starting to get old.

5. Emerging markets mess: While the ECB officials are denying that EM contagion will spread to the Eurozone (see story), the recent selloff in European equities says otherwise. Knock-on effects are inevitable, given the vulnerability of the Eurozone’s recovery combined with the area’s significant exports to emerging market nations.

Aside from these 5 reasons, the short term rate markets are now reflecting a policy change by the ECB, though the timing remains unclear. The June Euribor futures have spiked – indicating a lower implied Euribor rate – 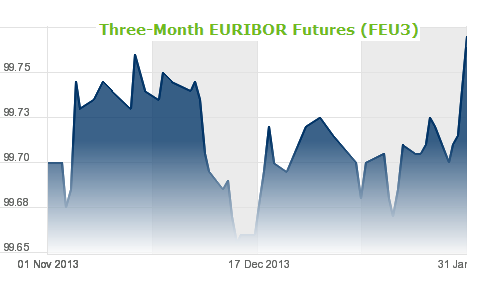 … and German short-term government yields fell materially. These are signs of the markets’ expectation of lower short-term rates going forward.

Over the next few meetings we should see a shift by the ECB toward a looser monetary policy. Otherwise the central bank will be toying with deflation risks.

Seven latest developments in Venezuela – a crisis in…