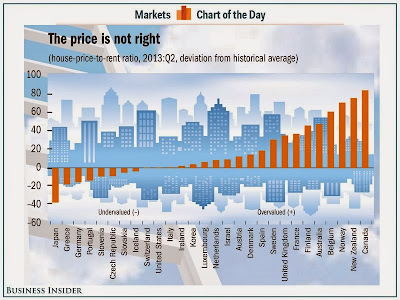 This Great Graphic was posted by Steven Perlberg on Business Insider. Drawing on research by the IMF’s Hites Ahir and Prakash Loungani, the chart compares the house-price-to-rent ratio compared with the historical average.  This is a standard measure of valuation.

Clearly by such a metric, the recovery in the housing market has been uneven. Canada has the dubious honor of having the most over-valued houses, or where it makes the most sense to rent. The current ratio is about 85% above the average.

We have suggested Mark Carney is the luckiest man.  Twice he has been blessed.  First, he left his post at the head of the Bank of Canada just as investors began questioning his forward guidance that had suggested early rate hike.  He left Canada before it was generally appreciated that household debt in Canada is greater than at the extremes in the US and UK.  He left Canada before many recognized the sins of a housing market bubble in Canada.

Second, he joined the Bank of England just as evidence began accumulating of a stronger economic recovery.  Ironically, Carney was plucked by Prime Minister Cameron, at least in part, because he offered a more activist approach to providing monetary support (leave aside that the previous Governor was consistently outvoted when proposing to expand gilt purchases).

While BOE’s Carney has played down the risk of a housing bubble in the UK, central bankers in New Zealand and Norway have warned of the growing risks.

The IMF’s global house index rose in Q2 13 for the sixth consecutive quarterly advance.  Prices appear to have risen in Q3 as well and appear to be rising in Q4.  In the UK, the average asking price rose 10% in October alone.   One of the noteworthy phenomenon that has emerged during the recovery is the cross border property purchases.  Chinese and Russian buyers in Europe and the US are the subject of numerous anecdotal reports.

Sovereign wealth funds, including by oil producers in the Middle East and Norway, are also thought to be active buyers.  These purchases often do not rely on credit.  This may also be part of a larger movement of institutional investors investing in housing markets globally.

Japan lies at the other extreme.  House prices are relatively cheap.  Japan does not appear to be a favored location for foreign investors.   There may be a number of structural factors at work in Japan,  including demographics, as well as the general persistent deflation    Greece, which is experiencing a dramatic internal devaluation, which means deflation, and it house prices also look cheap by this metric.

Perhaps the most surprising is that of these OECD countries, Germany has the third cheap housing market relative to rents.  This stand in sharp contrast with a Bundesbank Report that suggested that in some of the largest cities, German houses were 20% over-valued.

Compared with rents, house prices in the US, Switzerland and Italy are on their long-term averages.  Ireland and South Korea are also very close to their historic averages.  There still seems to be scope for Spanish house prices to fall (which seems more likely than rents rising given the high levels of unemployment).