Rising global debt levels will trigger the next crisis

The conclusion of the recently released 16th Geneva Report on the World Economy is that debt is the Achilles heel of our cyclical recovery. The Geneva economists warn that, despite the widespread belief that a general deleveraging has occurred due to the Great Financial crisis, aggregate global debt levels are considerably higher today than they were when the crisis began. The economists rightly worry that this debt will precipitate another global economic crisis at some point in the near future. Some thoughts below

Given that the last piece I wrote here at Credit Writedowns was on private debt overhangs and the business cycle, I find the Geneva report conclusions enlightening. To continue the framing from that piece, I would say that the broad macro picture is one of elevated financial fragility in advanced economies due to stretched household balance sheets. Governments in those economies have been moderately successful in mitigating the destabilizing impact of household balance sheet debt stress by socializing losses through bailouts and other forms of government support and by deficit spending where private deleveraging has occurred.

The net impact, then of the Great Financial Crisis, has been to shift debt burdens onto government balance sheets where, due to government’s taxing power, the debt is most easily borne. At the same time, to the degree household balance sheets have been strained, the cash flow implications have been lessened significantly by the wholesale reduction in interest rates across advanced economies.

This is not an environment of robust growth, however. The goal of policy makers has been to allow creditors to receive as much net present value from their loans as possible, which means minimizing debt relief, retarding consumer spending growth. As wages are stagnant, only  through some modest releveraging have consumers been able to maintain the consumption growth that has supported recovery.

At the same time, the emerging markets have seen debt levels skyrocket as advanced economy monetary easing has precipitated an influx of volatile capital in search of higher returns. China, in particular, has seen private debt levels surge. According to Standard Chartered Bank, China, which has struggled to maintain growth in its export-led economy in the face of slowing demand from advanced economies, has seen total debt-to-GDP move to 251% through June 2014, up from 147% at the end of 2008. By emerging market standards, this is a very elevated level. The only economies with more debt are all advanced economies. The US, for example had a debt to GDP ratio of 260% at the end of June, while the UK’s level was 277%.

In China, the ill impact of the debt growth is visible in the massive overbuilding of empty airports to serve, empty cities of empty streets, apartments and  shops. There will be massive losses from this episode. But it isn’t clear to me, however, that a crisis in China is in the offing. What is clear is that a slowing in growth will come, whether by lower credit growth levels or via a credit crisis. Michael Pettis argues for the former as more likely than the latter.

But, from a global perspective a crisis due to imbalances somewhere in the global system makes sense just as it did after the US subprime fiasco, where a tightly coupled system combined with widespread financial fragility to produce an epic credit crisis because this is a secular problem.

Growth in advanced economies has been declining since the 1980s. Italy is a perfect example of the growth trajectory. Edward Hugh noted last month that moving average growth rates in Italy have declined for three decades, recently turning negative. 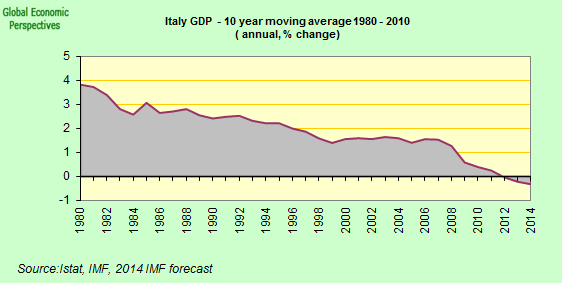 A similar trajectory is evident in Germany and Japan as well as many other advanced economies.

The growth slowdown has been masked by the secular bull market in interest rates, with rates coming down from steep yields in the early 1980s to near zero percent as inflation has declined. This allowed debt service costs to decline even as credit growth levels surpassed nominal GDP growth levels, causing debt to GDP to rise. When interest rates in advanced economies hit the zero lower bound, the artificial boost from credit growth came to an end and we have been stuck in a weak growth environment ever since.

Negative interest rates will not hep here. They are a tax on lenders. Implicitly, a negative interest rate is the equivalent of a credit writedown or a haircut because it acts to lower the net present value of capital to lenders, and thus eats into lender capital and retards economic and credit growth.

Meanwhile, the formerly buoyant emerging markets have slowed. We see problems everywhere – from China to Russia to Brazil to South Africa, and beyond. The question for me here is: how tightly coupled is the system still? If it is still very tightly coupled a large enough of a shock in one locus will spill over into other arenas as it did in 2007, in 1997, in 1990, in 1982, and in 1974. Every 8-10 years, we have seen a large hiccup in the financial system due to these interlocking dependencies. And with monetary policy extremely stretched and interest rates already near zero, the scope for monetary easing is limited.

In my view, this makes a good case for those who believe another major crisis is coming, not necessarily in China but rather because of the Chinese slowdown. The logical next question goes to financial resiliency and policy space, which are most limited in Euroland but could be surprisingly lacking in Australia and Canada since their household sectors have yet to receive a potent enough exogenous macro shock to cause a sustained deleveraging. Just as rising debt levels caused a sovereign debt crisis centred in Europe that we just left behind, rising global debt levels will trigger the next crisis, location as yet unknown.

Deleveraging, What Deleveraging? The 16th Geneva Report on the World Economy