Please note that throughout this post I take “labour force” to mean people aged 15-64, which is consistent with OECD definitions. I exclude over-65s and children under 15.

Patrick Artus at Natixis notes that there is something “odd” about the US’s economic recovery. The labour force participation rate (or rather “activity” rate, as I am using OECD definitions) is falling for both men and women. 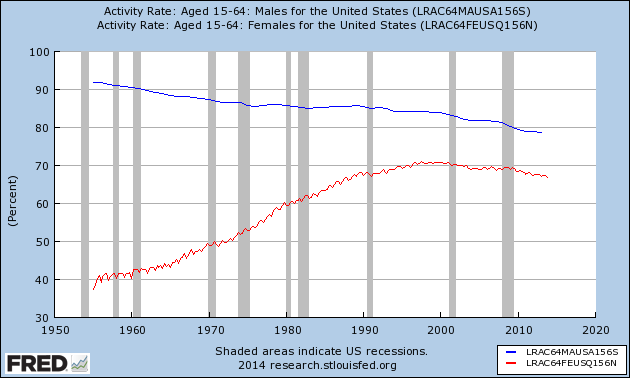 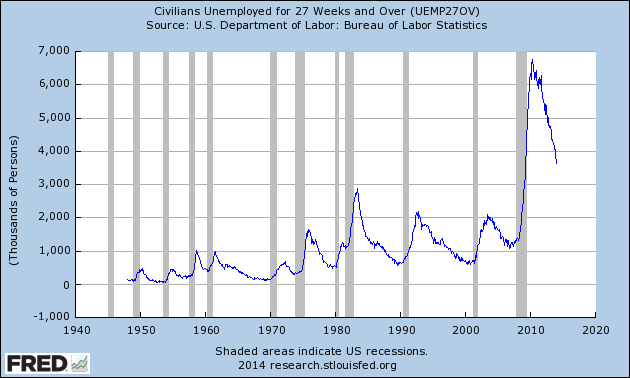 But of course, measures of the long-term unemployed tell us nothing at all about discouraged demand: if they are reported as “unemployed”, then they are counted IN the active labour force. If anything, the fact that that US is still reporting high levels of long-term unemployed, five years after the recession, suggests that discouraged demand is NOT the principal cause of the declining activity rate.

This is something of a pity. If the declining activity rate were due to long-term unemployed giving up looking for work, we might expect that it would improve once jobs became easier to find. A cyclical fall in the activity rate is far easier to address than a secular decline.

Research by Alicia Munnell, director of the Center for Retirement Research at Boston College, has suggested that the falling participation rate is a secular decline due to demographic changes. The story goes that labour force participation peaked in 2000, then has declined since and is now on a downward trajectory as baby boomers retire and leave the labour force. In a recent speech, the Fed’s James Bullard appeared to support this argument. (Update: To be fair to both, they include over-65s in their definitions. I’ve explained at the end of this post why I exclude over-65s).

But Natixis’s Patrick Auter has a different explanation (my emphasis):

Using the data from the OECD’s Employment Review quoted by Natixis (op.cit.), I have charted activity rates for men by age decile: 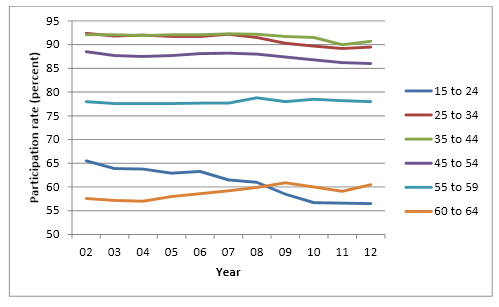 The same features show up even more strikingly in the female chart: 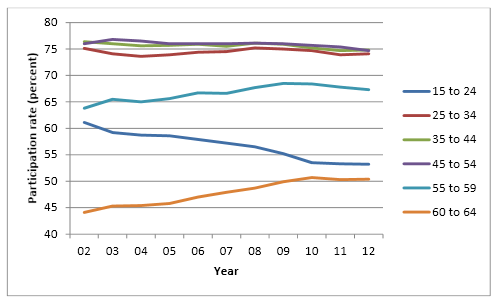 Taking out the oldest and youngest deciles from both charts gives us the activity rates by decile for prime-aged men and women: 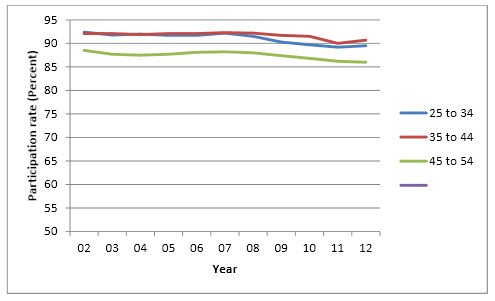 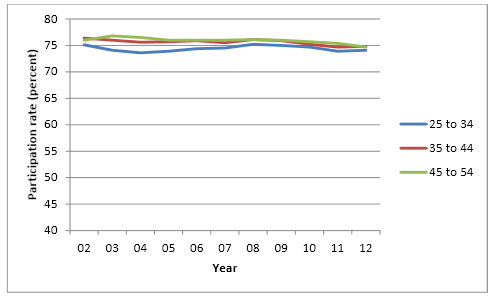 There is evidence of a small cyclical fall in the activity rate on the men’s chart, which is beginning to reverse, at least for younger men. The women’s chart also seems to show slight cyclical variation.  But there does not seem to be a crisis of activity among prime working-age Americans. There is no “outbreak of idleness” among men, as Charles Murray has suggested. And there is no outbreak of single mums depending on state benefit, either: the female cohort whose participation rate is falling the most is 45-54 – hardly the age of single parenthood.

But this is not due to idle young people living off their parents, lounging around on street corners and smoking weed. This chart from the OECD shows that the participation rate of young people aged 15-20 in education has risen 10% since 1995: 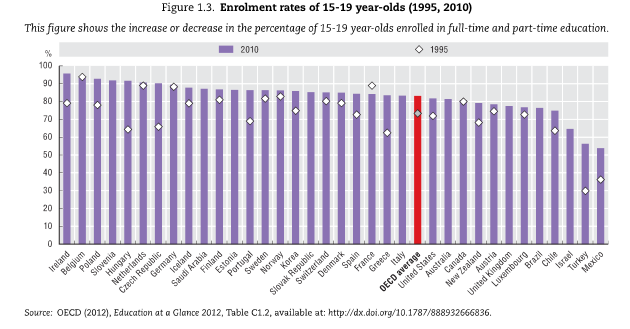 And the participation rate of young people aged 20-29 in education has risen about 6%: 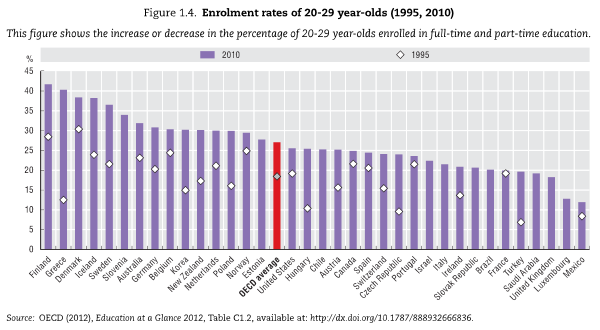 According to the National Center for Education’s report “The Condition of Education 2012”, participation in education and training has risen hugely, particularly among young adults (my emphasis):

So it is education that is primarily causing the decline in working-age labour force activity. That is not to say that ageing baby boomers won’t be a problem, nor that there may not be some discouraged demand – especially since it seems jobs are rather hard to come by. But if these effects exist. they are marginal compared to the loss of young people from the workforce due to education and training.

The decline in the participation rate casts doubt on the reality of the improvement in the labour market situation in the United States.

Is he right? Well, no. A better–educated workforce should improve the quality of labour, even though it diminishes its quantity, particularly among younger cohorts. And that would be a good thing both for business and for labour.

Though of course, the available education may not be as valuable as people think.

Matthew B (@boes_ on Twitter) points out that I have excluded over-65s from my analysis, which necessarily invalidates the research findings that baby boomers are responsible for the falling participation rate. Indeed I have, because I am interested in why working-age participation is falling. We don’t regard over-65s as “working age”, any more than we regard children under 16 as “working age”. It is in my view perverse to include over-65s in measures of labour force participation but not children under 16. And more to the point, it is a serious distortion.

Over-65s are by far the largest part of the non-working population, and their number is growing, both because of increasing longevity and because of the retirement of “baby boomers” (people born 1946-64). Their presence in measures of labour force non-participation dominates everything else. This means that other factors, such as those I am highlighting in this post, seem much less important. With over-65s in the picture, retiring baby boomers are indeed by far the most important reason for declining labour force participation. But when we exclude them – remembering that we do not expect them to be active labour force participants anyway – it becomes clear that there is a secular change going on: young people are delaying their entry to the workforce by studying for longer, and older people are delaying their planned exit from the workforce by working for longer. Both of these are to some extent forced by legislation: young people in many states now have to remain in education until they are 18, and the statutory retirement age is gradually rising.

I would like to clarify a point I made in the post which has caused some confusion since I am excluding over-65s. When I refer to “baby boomers NOT retiring”, I am referring to those older people who would have retired earlier than their statutory retirement age but are choosing not to, perhaps because low interest rates mean their savings are not delivering the returns they expected. It’s also worth noting that social security changes mean there is now a considerable disincentive for people aged 62-64 to retire early, since if they do they lose substantial parts of their social security. This may partly explain the rising participation rate of both men and women aged 61-64.

It should be apparent that if I had left over-65s in my analysis, it would not have been possible for me to reach these conclusions. Therefore I defend my decision to exclude them.

Some brief thoughts on releveraging and wage growth

How do you say “dead cat” in Latvian?

Why the Fed can’t taper