Back in early December the government of Argentina raised taxes on credit card purchases in foreign currency to 35% from 20%. Online Christmas shopping abroad became increasingly expensive. However, dollars continued to flow out of the country even with this high levy, pressuring foreign reserves.

The central bank had “printed” enormous amounts of peso in 2013 to fund the public sector. But with the country’s fiscal situation still deteriorating (see chart below) and demand for dollars continuing to rise, the Fernandez administration chose last week to devalue the peso.

The gradual depreciation policy that was in place before just didn’t work. Even with taxes and other restrictions, the outflows were simply unsustainable – the government could not afford selling dollars below market rate for too long. The idea behind this devaluation was to stem dollar outflows by making the dollar far more expensive (see chart that shows dollar appreciating in the “official” exchange rate).

The goal was to bring the value of the dollar closer to where it trades in the “unofficial” markets. Some clever economists working for Fernandez probably told her that if we make this adjustment, the supply/demand fundamentals will be in balance and the outflows will be halted. Officials even promised to bring the tax on foreign transactions back to 20% after the devaluation. With the dollar now far more expensive, imports and dollar outflows are bound to slow – even with the lower tax. Unfortunately that was wishful thinking.

The devaluation backfired. As the nation’s citizens learned about the official devaluation, panic ensued and demand for dollars increased dramatically. Instead of the unofficial-to-official premium on dollars shrinking as planned, it spiked. 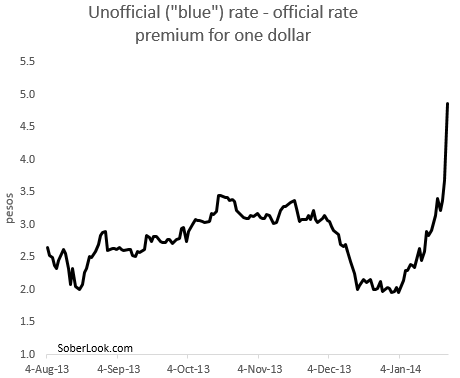 About that transaction tax going back to 20% … the government is now backpedaling.

ABC/AP: – Economy Minister Axel Kicillof told local daily Pagina 12 in an interview published Sunday that the Argentine tax rate on credit card purchases made in dollars will not be lowered Monday from the current 35 percent to 20 percent, as he had announced.

“In the case of currency for tourism and for purchases with a credit card abroad, the 35 to 20 percent move will not be implemented this Monday,” Kicillof said. There was no word of when, or if, the tax rate on credit card purchases may be eased.

Now imports will become even more expensive and the central bank will need to print even more pesos to keep the government going. Inflation, already the highest in the Americas, will accelerate further and generate additional demand for dollars – a downward spiral.

GS: – According to our projections, the level of reserves will fall to USD21.6bn by the end of 2014 [vs. $30.9 now], after experiencing a loss in the year of USD9.2bn. We also expect the exchange rate to suffer a yearly depreciation of approximately 55% to finalize the year toward 10 ARS/USD. Additionally, as a result of the discussed additional pass-through effects of this larger exchange rate depreciation, including a higher floor for incoming wage negotiations, we increase our year-end inflation forecast to a range of 35%-40% yoy.

Argentina is not Zimbabwe just yet, but it’s only a matter of time.