What is the labor participation rate telling us?

DB’s chart of the US unemployment rate (below) received numerous comments on Twitter. Clearly the projection of the linear decline continuing at the same rate is a bit aggressive. But many of the comments were dismissive of the measure altogether – arguing that these falling unemployment levels are not that meaningful in the face of the declining labor participation rate. 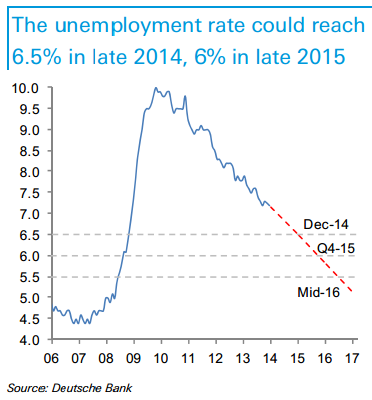 Perhaps a better measure to use here is the so-called “activity rate” which is often used by OECD researchers to compare labor markets across different countries. It is defined as “the active population (employed plus unemployed) divided by the working age population.” In other words, what proportion of the “working age” population is either working or is officially listed as unemployed. A decline in that rate would indicate “working-age” people leaving the workforce. And as the next chart shows, that is indeed the case (note: for those who are not happy with the 15-75 age range, rest assured that other similar ranges for working age population yield very similar results.) 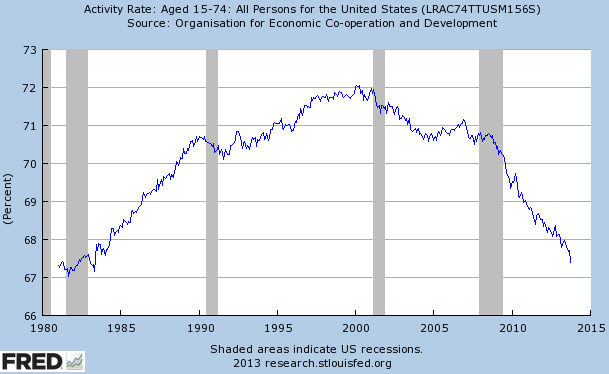 This tells us that about 3.5% of the working-age population has left the labor force since the start of the Great Recession. Should those people be also counted as unemployed? If so, here is what the unemployment rate trend would look like: 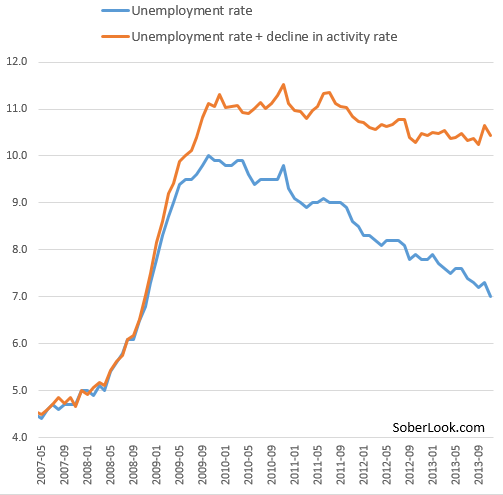 It’s not clear however if the orange line above represents “true” unemployment. For example teenagers had far greater employment opportunities in the 90s than they do now, with youth labor force participation having declined sharply over the past decade. But should a 17 year-old who lives with her parents and can’t find part-time work be classified as “unemployed”? Evidence suggests that a great number of the labor force “dropouts” were in the 16-19 age group. This would indicate that the “effective unemployment” rate (depending how one defines “unemployed”) is somewhere between the orange and the blue charts above, with DB’s projection representing the lower boundary.