European interest rates and the showdown over Greece

I want to riff off a David Beckworth post in thinking about the problem in Europe and extend the discussion with some comments on the meltdown in Greece. The gist of what I intend to say is that the eurozone, as constructed, can never work because of a one-size-fits-all interest rate policy and a lack of fiscal stabilizers to offset this. Moreover, Greece could end up defaulting even before the April deadline hits if things really go south from here. Europe is not out of the woods by a long shot.

Let’s start with this statement: Germany was in a soft depression in the 2000s.

This one sentence explains a lot because it makes clear why divergences in eurozone economies developed so dramatically before the financial crisis of 2007-2009. Here’s how I put it in 2010: “the economic side of re-unification was a complete disaster. For purely political reasons, Helmut Kohl, then the German Chancellor, rebuffed the advice of his economic advisors and decided to unite East and West Germany at an exchange rate of one for one. This represented a significant over-valuation of the East German currency. Moreover, the privatization of eastern German state enterprises by the Treuhand was a boondoggle for the few to enrich themselves at the expense of the many as it was in Russia. And it led to massive speculation in eastern German real estate by companies with zero experience in property. The result was a property bubble and crash and lingering indebtedness in the German corporate sector.

“To make matters worse, Kohl also pushed through the now infamous east-west Lohnangleichung (wage parity) whereby eastern German worker wages quickly rose to the level in the west. The east was a heavily manufacturing-based economy. So wage parity meant a pricing out of eastern German labour, high unemployment there, and an eventual move of German manufacturing to central and Eastern Europe instead of to the former East Germany.

“In short, eastern Germany was uncompetitive. Forget about blühende Landschaften (a flourishing economy ) in the former East Germany. Try depression. I’m talking unemployment to the high teens, a rise in neo-Nazis amongst unemployed young males, huge municipality and state indebtedness to deal with the social costs, and a mass migration from east to west.”

This 2010 post on “The Soft Depression in Germany and the Rise of Euro Populism” is one of my favourites at Credit Writedowns. Read it here. It gives you a better understanding of why Germany breached the Maastricht 3% hurdle in the 2000s and why it undertook the Hartz reforms in order to make its exports more competitive. Germany was at once, the biggest economy in the eurozone and in a soft depression, meaning that, with the one-size-fits-all monetary policy of the ECB, policy rates had to be lower to accommodate Germany. By contrast, in place like Spain and Ireland, governments were running budget surpluses as their domestic economies overheated due to the interest rate policy geared toward Germany.

David Beckworth has a good read on this in a recent post about the origins of the eurozone monetary policy crisis. Let’s look at his take on the crisis but pay special attention to the last chart, which I will come to shortly:

there were actually two stages to the Eurozone crisis. The first stage began in 2008 when the ECB raised interest rates just as the Eurzone economy began to weaken. This explicit tightening along with the subsequent failure of the ECB to offset the passive tightening of monetary policy through 2009 adversely affected all of the Eurozone. In this stage nominal spending–or aggregate demand–fell in both the core and periphery economies. Consequently, real economic activity also collapsed in both regions. This can be seen in the two figures below. The first figure shows nominal spending for the two regions while the second one reports real GDP growth and the change in the unemployment rate.1 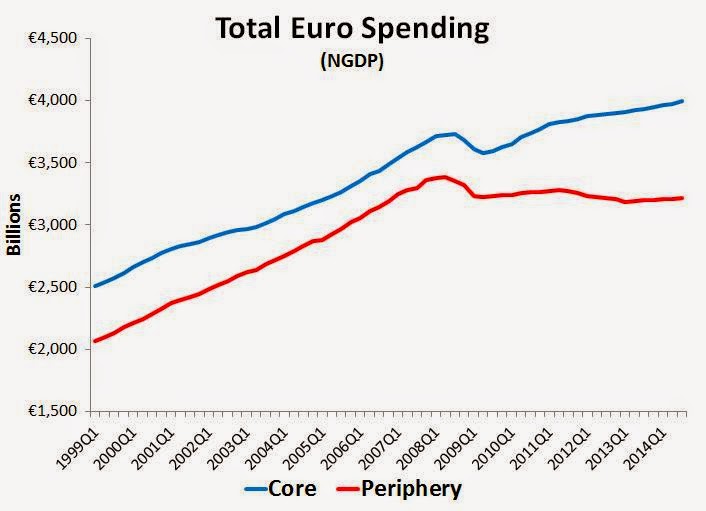 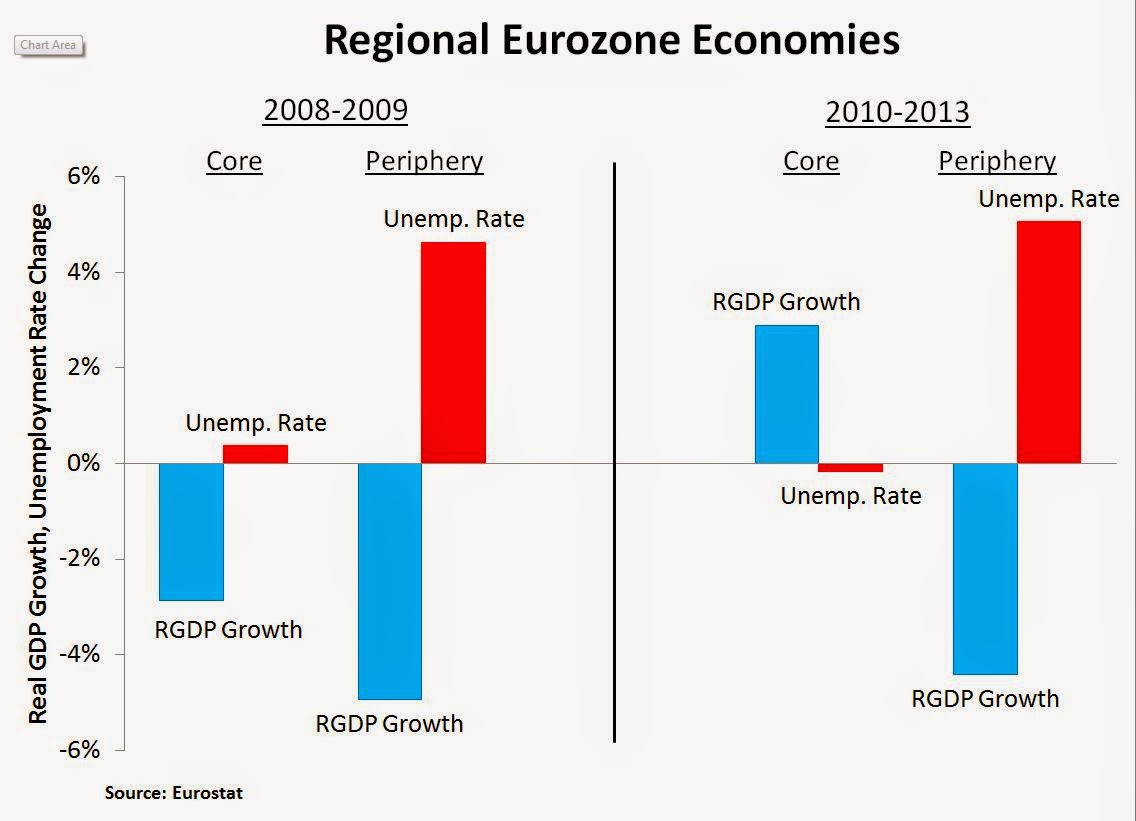 The above two figures also point to the second stage of the Eurozone crisis which begins in 2010. The first figure shows that while aggregate demand continues to grow in the core regions (albeit below trend) after 2010, it actually falls in the periphery. Likewise, the second figure shows that for the 2010-2013 period real GDP growth rises and the unemployment rate falls for the core, while the opposite happens to the periphery. The core heals while the periphery bleeds during this stage.

What these figures suggest is that the first stage of the crisis was a Eurozone-wide monetary crisis, while the second stage was only a regional Eurozone monetary crisis. In other words, the first stage of the crisis was not that different than what happened in the United States during 2008-2009. And for the core economies as a whole the ECB was sort of Fed-like for them after 2010. It was, then, the periphery economies that suffered from the absence of Fed-like policy after 2010. 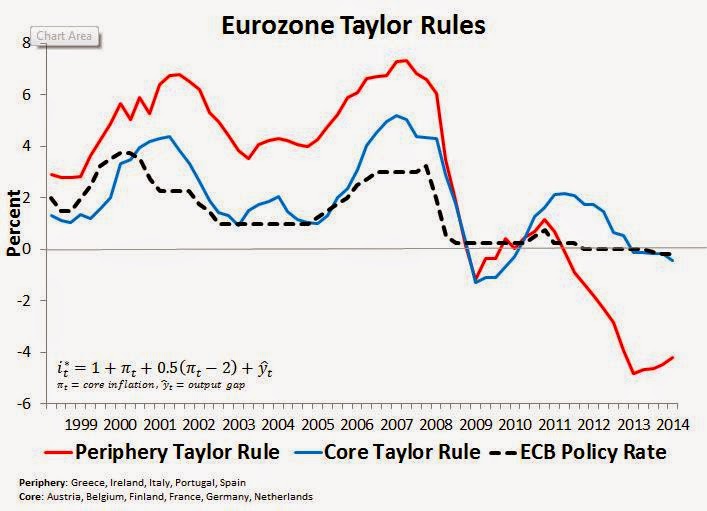 Stepping aside from the discussion on how disastrous policy has been post-crisis, which the first two charts show, look at the third chart. What you will notice is how massive the differential in implied Taylor rule was for the periphery and the core. Moreover, you will also notice that the implied Taylor Rule for the eurozone policy rate closely tracks the core i.e. Germany and is wholly unsuitable for the periphery throughout the eurozone’s entire existence. That’s huge! This chart basically says that the eurozone is constructed as a monetary union with interest rates appropriate for Germany, without sufficient macro policy convergence or fiscal stabilizer offsets to attenuate the fallout of such a policy.

In short: the eurozone never saw enough macro policy convergence before the euro began in order to be an optimal currency zone. Moreover, the convergence also never happened afterwards either. As a result, monetary policy was always going to be an a priori source of imbalance no matter what transpired economically. In this case, because policy was geared toward Germany, where trade makes up a large percentage of GDP, the one-size-fits-all monetary policy created an external imbalance that was in essence a form of vendor financing. And when the crisis came, that financing ran into problems.

One could argue that a currency union could work even so, as long as their were fiscal offsets and fiscal transfers at the supranational level. But the eurozone was constructed without these. It was designed to fail. And it has failed. And it will continue to fail every time there is a major economic downturn until we get macro economic convergence or supranational fiscal transfers to compensate for the amplification of divergence through monetary policy. Greece is just the canary in the coalmine.

Now, on Greece, I wrote on Thursday that “it is not clear to me that the Greek interpretation of the loan extension is in accordance with the Troika’s understanding. German finance minister Wolfgang Schäuble is selling the deal to his German compatriots by saying things like, “Greece will not get a single penny until it complies with its obligations.” At the same time, the Greek finance minister Yanis Varoufakis is telling the press that “the Memorandum is finished! Because you know what the Memorandum is? It is a series of conditionalities and criteria that needed to be fulfilled. These criteria are now over!” These two statements are mutually exclusive in my view. Someone is going to see their interpretation of events not being fulfilled. And that is going to set up another roadblock.

“My view: The German interpretation of the extension is untenable politically for Syriza. And if it comes to implementing on those lines – as the IMF and the EC voiced concerns too, we won’t even get to the end of April before this agreement collapses. The Greeks need to be preparing their economy and financial system for capital controls and default right now. This is very important because, even if we get past April, there are going to be no writedowns in June.”

We are getting to a point now where Greece could actually default before the loan extension agreement comes into place and the monies are disbursed. Where I was hopeful about an agreement and the terms of the agreement met my expectations, I am not hopeful about the duelling interpretations of that agreement. At a minimum, this sets up a confrontation on writedowns or GDP-linked bonds in June. But we may not even get there if Greece is forced to implement the extension along German interpretation lines.

Investors are telling us that Grexit is now more probable than at any time since March 2013.

The sentix Euro Break-up Index for February rises strongly from 24.3% to 38.0%. Despite the soluattion which was found last week for Greece ever more investors expect the Mediterranean country to leave the euro soon. Also, for Cyprus the exit probability increases markedly. And, in the background, the lately surprisingly firm confidence in Portugal and Spain is eroding, too.

So, just as the ECB has finally decided to offer a backstop to the periphery, we are seeing eurozone breakup odds shoot up. Until Europe addresses its institutional flaws, eurozone breakup will always be a background issue, and not just for Greece but for many other countries as well.

Some thoughts on relative value in the US and Europe