Abenomics – What Could Possibly Go Wrong?

In an article entitled “Why Japan’s GDP Plunge Isn’t As Bad As It Seems”, Bloomberg writer Bruce Einhorn put it like this:

The last time Japan raised the consumption tax, in 1997, the economy went into a tailspin. The impact doesn’t seem to be as bad this time, though. The economy contracted at an annualized 6.8 percent in the second quarter of the year. Bad, to be sure, but not dismal. For all its severity, the plunge was actually smaller than many economists had expected, with a survey of 37 economists by Bloomberg showing a median estimate of a 7 percent decline.

That’s why investors looked at today’s numbers and shrugged.

Takeshi Minami, chief economist at the Norinchukin Research Institute in Tokyo also felt the number wasn’t a disaster, since he told Bloomberg despite the sharp fall, “the probability is high that the July-September quarter will see a rebound.” Well, naturally, after a 19.2% annualised drop in household consumption, or a 35.3% drop in residential investment doing better won’t be hard, but that’s a kinda low bar to be working from.

Another line of argument you can find repeatedly in the financial press is that the number was a bad one, but the silver lining is that this means the Bank of Japan is more likely to do additional QE. “The contraction was sharp. There is no argument about that,” Toshihiro Nagahama, chief economist at Dai-Ichi Life Research Institute told the Wall Street Journal, however he had “no doubt” the government and the Bank of Japan would come under pressure to act as a result. Pressure from whom? As we will see later, maybe not from Japanese the citizens these institutions are supposed to represent.

At the end of the day what matters isn’t whether Japan’s economy grows slightly (or not) in the coming quarter, but whether the country is on a stable recovery path or whether growth will continue to remain lackluster and weak even as the government debt level rises. 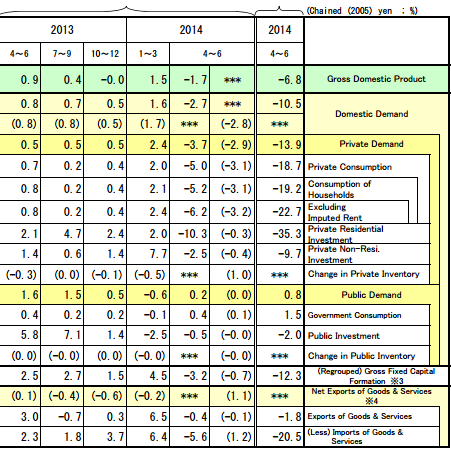 Apart from the obvious shockers, details worth noting are the 1% of GDP’s worth of quarterly inventory accumulation (see chart above), which will have to be sweated down in the next quarter, and the 20.5% annualized fall in imports. This was good for the net trade component, which was positive for the first time in yonks, but the fall is simply the reverse side of the consumption drop. In fact Japanese export growth has been weakening steadily in recent months, and this obviously has nothing to do with the sales tax.

Exports were down 2% in June over a year earlier, and in volume terms they were down 2.5% from September 2012, just before the Abenomics driven yen devaluation started. So if one of the objectives of Abenomics was boosting exports it is obviously failing. As Naohiko Baba, chief Japan economist at Goldman Sachs Group and former central bank employee told Bloomberg: “The BOJ predicted that a weak yen would boost export volumes and spur
spill-over effects by increasing domestic production and expanding the
overall economy — but that path isn’t working. It raises the question of what the weak yen has done in terms of living standards of the general public.”

It seems that manufacturers have been moving production to lower-cost countries during the years of yen strength, thus reducing the effect of exchange rates on exports. Honda, for example, has more car production capacity in North America than its home market and last year exported more vehicles from its U.S. factories than it imported into the country from Japan.

The Bank has had more success with inflation since core inflation was up 3.3% over a year earlier in June. But that number soon shrinks in proportion when you strip out the estimated impact of the recent tax hike. According to the Bank of Japan the ex-tax number for June was 1.3%, down from 1.4% a month earlier. And even this inflation isn’t demand driven: it is largely a carry over from the earlier yen devaluation. As such it is quite likely to disappear with time.

Representatives of the Bank of Japan continue to insist that the country is on course to exit deflation, but many external observers aren’t convinced, as this recent chart from analysts at Credit Suisse suggests. 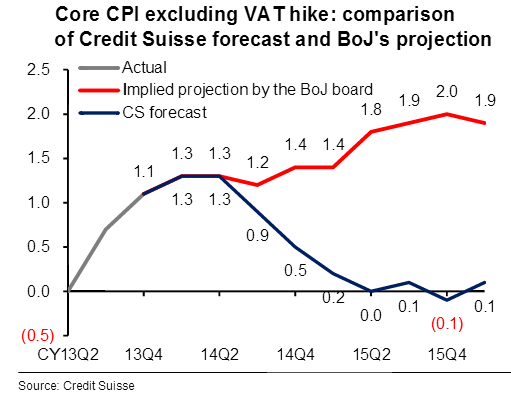 As the Wall Street Journal put it:

”The latest data, which exclude the effects of April’s consumption-tax hike, suggest that Japan is slipping away from the 2% inflation target set by Mr. Abe’s central banker, Haruhiko Kuroda. Price increases for imports, triggered by a yen-devaluation campaign, have now filtered through the economy. Since Abenomics hasn’t included concrete economic reforms, Japan is sliding back into its status quo before Mr. Abe was elected in late 2012.”

Another problem which faces Abe is that the results of his policy have been very unevenly distributed.Those who gained from the yen devaluation (shorting the yen) or from the rise in Japanese equities, or those corporates who  made windfall profits on their sales have been the lucky ones, because the rest of the Japanese have been facing falling living standards. As the Economist pointed out: even as jobs grow scarce, real wages continue to fall. 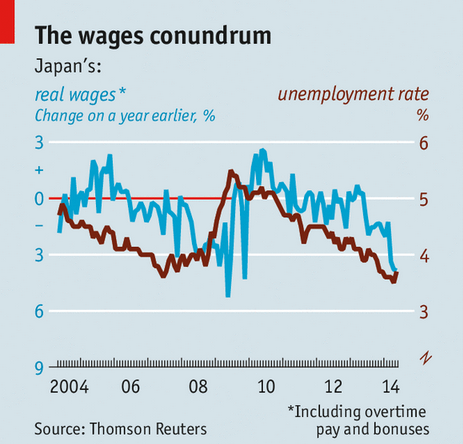 Nominal wages have been rising again in Japan.

Average total wages, consisting of base pay, overtime and bonuses covering both regular and part-time workers, grew 0.4% on year in June, following increases of 0.6% for May and 0.7% for April and March. Four straight months of year-on-year risse is the longest stretch since total wages grew for six straight months between June and November 2010. But real wages – which take into account inflation and matter much more to consumers than nominal wages, declined 3.8% on year in June, the fourteenth consecutive month of decline, and the biggest drop since December 2009.

Not unnaturally many Japanese are starting to get fed up with Premier Abe and his economics revolution. What good to them is a policy which only helps the upper 10% of the population and the overseas investment community. Tokyo University’s Shin-ichi Fukuda has carried out some pretty interesting research in this regard. As can be seen in the two charts reproduced below, most of the movement in both  the Nikkei has taken place while the Japanese themselves were offline and asleep. 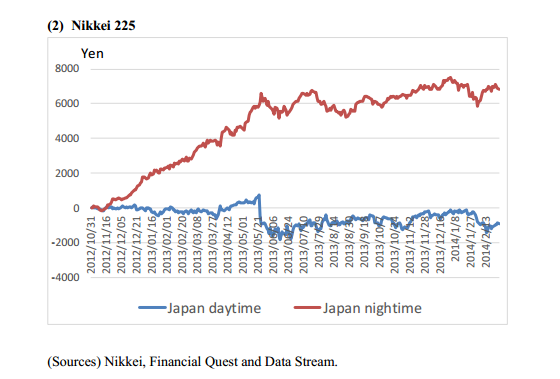 And pretty much the same picture emerges if we look at movements in the yen. 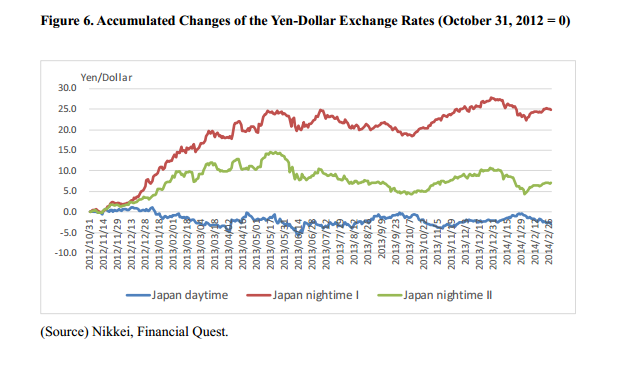 It shouldn’t surprise us then to find that Shinzo Abe’s popularity is plummeting in Japan.

Opinion surveys conducted in July by Japan’s major newspapers show Abe’s support ratings have fallen below 50 per cent for the first time since he became Premier, while the number of people who say they disapprove of his government is approaching the number who say they approve. 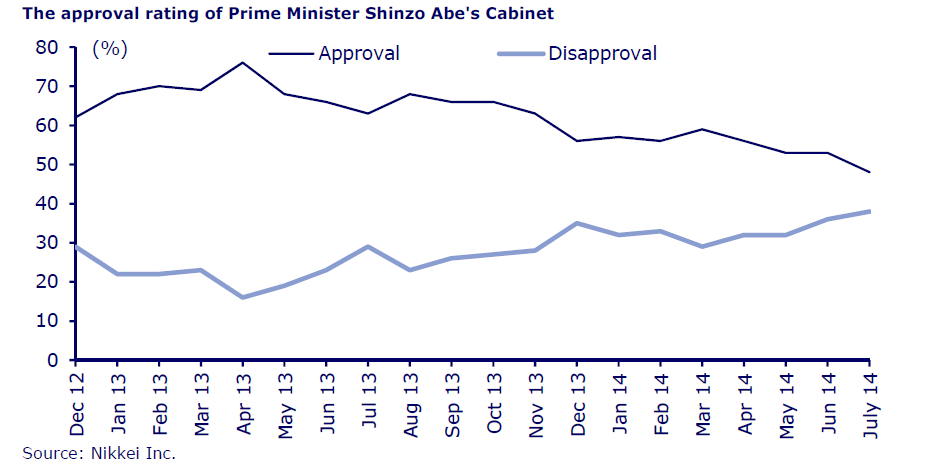 And at the heart of the dissatisfaction lies the governments economic policy. A recent survey published by the Sankei newspaper showed 47 per cent of respondents said they disapproved of his government’s handling of the economy, 7 percentage points more than the number who approved.The Sansei, described by the FT’s Jonathan Soble as a “right-leaning” daily that has mostly “cheer-led” for Abe, had a headline stating “There is a shadow over Abenomics”. As Soble says one of the reasons for such dissatisfaction among many Japanese “is simply that Abenomics has made them poorer, thanks to its uneven effect on prices and wages.”

So while many in the markets and in the academic community think the obvious response to what is happening in Japan will be more BoJ easing, the Japanese themselves may not see it this way.

Part of the reason they might not see it in the same light as the central bank dependent investment community is that there is a solid body of opinion in Japan that recognizes that a large part of the country’s issue is demographic and that simply “jump starting” a bit of inflation won’t make the problem go away..

The question I would ask is this: given all the doubt which exists about the real roots of Japan’s problem, and the fact that it may well be a permanent structural problem and not a temporary liquidity trap one, is it really justified to run such a high risk, all-or-nothing experiment? Even Paul Krugman seems to have changed his assessment various times since the  problem started and while he still fully supports the general approach being taken he now thinks the natural rate of interest may remain permanently negative and that fiscal stimulus might be necessary on a permanent basis (liquidity trap without end, amen).

What makes people like me nervous is the thought that if the central bank can’t deliver on its promise to deliver inflation, or if the Japanese voters decide they have had enough of the experiment, then a loss of confidence might ensue, and all those dubious risky asset positions might unwind suddenly, just like an earlier set did in 2008.

And there are plenty of people in Japan who have been pointing this out all along. Seki Obata, a Keio University business school professor for example, who in 2013 published a book “Reflation is Dangerous,” argues exactly this, that “Abenomics” is exposing Japan to considerable risk without any clear sense of what it can accomplish. Obata also makes the extremely valid point that there is simply no way incomes can rise across the entire economy because the baby boomers are now retiring to be replaced by fewer young workers with post labour reform entry-level wages. Japan’s overall consumer spending power will therefore fall, rather than rise as Abe hopes. “Individual companies may offer wage increases, but because of demographics it is simply impossible to increase the total amount that is paid out in wages,” says Obata. “On the contrary, that amount will shrink.”
Simple logic you would have thought, but logic in the face of irrational exuberance scarcely stops people in their tracks.

As far as I can see, all of this points to one simple and evident conclusion: that Japan needs deep seated cultural changes, especially ones directed to greater female empowerment and more open-ness towards immigration. Hardly matters for central bank initiatives, and indeed ones for which Shinzo Abe, who naturally has given his name to this new economic trend, is singularly ill equipped to carry through. Japan needs a series of structural reforms – like those under discussion around the third arrow – but these would be to soften the blow of workforce and population decline, not an attempt to run away from it. Monetary policy has its limits. As Martin Wolf so aptly put it, “you can’t print babies”.

The above is based on arguments fleshed out in much more detail in my  “mini book” the A B E of Economics.

The book is available with Amazon as an e-book. It can be found here.

You don’t need to buy a Kindle to read this book. You can download a free app from Amazon. 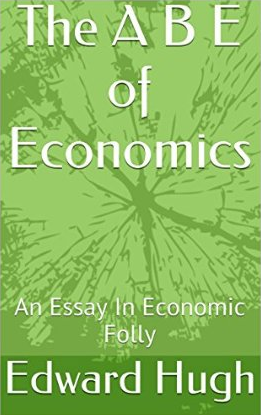