As a follow-up to an earlier discussion on rising deflationary risks in the Eurozone (here), it seems that the OECD is now also growing concerned about this issue. The latest economic report is openly suggesting that the ECB consider non-conventional policy measures (such as LTRO or securities purchases). Below is a good summary of OECD’s assessment of the situation in the euro area.

OECD: – In the euro area, recovery is lagging and uneven, unemployment – especially among the young – remains very high and inflationary pressures are very subdued. The ECB should consider further policy measures if deflationary risks become more serious. Current account adjustment is advancing in the periphery but price adjustment alone will not work given the impossibility of reconciling deflation, needed to regain competitiveness, and achieving nominal growth to support debt sustainability. Much less adjustment, if any, is taking place in surplus countries. More durable and symmetric adjustment is needed through reforms to labour and product markets, including liberalisation of services in Germany that would strengthen and rebalance demand.

Weakness in the banking system remains a major drag on growth in the euro area. The Asset Quality Review and stress tests in 2014 must be implemented rigorously – and followed up by bank recapitalisation where needed – to restore the transmission of monetary policy, strengthen financial-system stability and get credit moving again to enhance the effectiveness of structural reforms and support growth. Failure to use this opportunity could impair confidence in European banks and sovereigns. There is progress towards banking union but the transition promises to be complex and delicate as the criteria and responsibility for regulation, supervision, and resolution of banks have to be clarified.

OECD’s chief economist, Pier Carlo Padoan, said that the Eurozone deflationary risks “may be slowly increasing” and “the ECB must be very careful and be prepared to use even non-conventional measures to beat any risk of deflation becoming permanent.”

Some at the Bundesbank will likely oppose any such action by the ECB. But it’s becoming increasingly difficult for German central bankers to argue that deflation is not a threat to the area’s economy. Today we saw the German PPI number fall below analysts’ expectations, with the year-over-year measure moving deeper into negative territory. 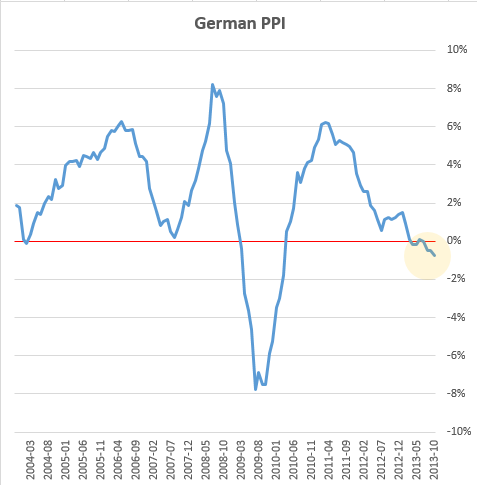 Econoday: – The ongoing softness of both the headline and core PPI continues to bode well for subdued CPI inflation (1.2 percent in October) over coming months. As such, today’s report will do nothing to deter speculation in financial markets that November’s ECB ease will not be the last of the cycle.

If this continues, the ECB will be under increasing pressure to take further (and most likely unconventional) policy action.

The Independent: – The eurozone must follow the examples of the UK, US and Japan by turning to the printing presses to avoid the threat of damaging deflation, according to an assessment by a leading economic think-tank [OECD].

More on the OECD report here.

The coronavirus pandemic is worsening