Today we saw another confirmation that the UK’s placement on the economic cycle curve (see post) in the “recovery acceleration” section is quite reasonable. The KPMG/REC employment report for the UK showed something we haven’t seen in a while – strong hiring demand.

Kevin Green of Recruitment & Employment Confederation (source: Markit): – “The jobs market continues to skyrocket with permanent employment and temporary placements at three and two year highs, and vacancy growth accelerating to a six year high.A combination of confidence returning to the UK economy and higher employer demand have contributed to this impressive set of figures.

“Starting salaries accelerated in July reaching the highest for 26 months. This is an early indicator of increased competition for candidates and skills shortages in a growing number of sectors. In addition to this, hourly rates for temp workers increased at the strongest rate since January 2008.

The chart below shows the spike in the KPMG/REC survey that is now also expected to show up in the Labor Force Survey (from the Office for National Statistics). 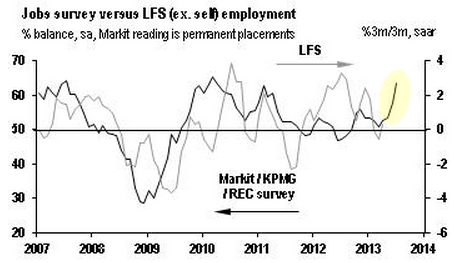 Just like the Fed, the BoE now also has a target unemployment rate at which it will be ready to bring rates higher. According to a recent statement by Governor Mark Carney, the UK unemployment rate, which has been stubbornly stuck around 7.8% for a year now, needs to get down to 7% in order to get the BoE moving. The central bank has communicated that it expects to keep rates at current levels through 2016. But if next week’s official employment report follows the KPMG/REC result, the BoE may be forced to reconsider.

“I think that the strength of the British recovery is probably somewhat underestimated,” Goodhart said in an interview today in London. “The strength of the upwards pressure on the British economy could well cause people to begin to be concerned whether reverting to normality a bit quicker might not be desirable.”

As a result of this 7% trigger on unemployment and stronger economic data out of the UK, the 10y gilt yield has risen much faster than the 10y treasury in recent days. The BoE governor has also emphasized that any rise in inflation will override the long-dated forward rate guidance (the so-called “inflation knockout”), making gilt investors uneasy. 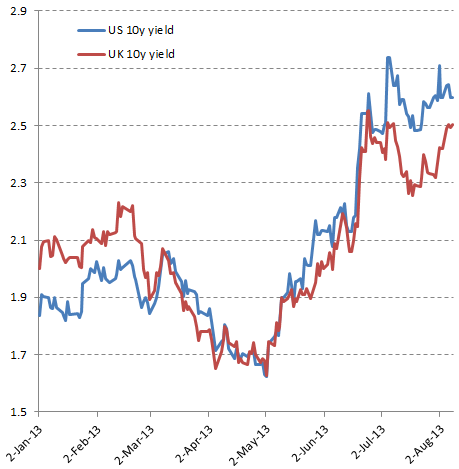 The UK is now facing its own version of “taper fear” (the winding down of the extraordinarily accommodative monetary policy), particularly if the the job market indeed makes a turn for the better. Analysts have begun advising clients to reduce their longer-dated gilt exposure.

CNBC: – Thushka Maharaj, rates strategist at Credit Suisse said he was bullish on gilts ahead of the inflation report, but now he recommends closing all “outright long positions”…

In particular analysts have advised selling 5-year government bonds, as that is that is where the Bank of England has focused most of its buying, so a winding down of its quantitative easing would affect those the most.