The Eurozone is trying to repeat Japan’s lost decade

Recently the IMF made it clear that the current euro area leadership needs to address its ongoing banking problems. The Eurozone’s banks are continuing to deleverage, with total loan balances to euro area residents now at the lowest level in 5 years. What makes the situation even more troubling is that many Eurozone banks banks are repeating the Japanese experience of the 90s. They are carrying poor quality and often deteriorating assets on their balance sheets, refusing to take writedowns that will require recapitalization.

The IMF: – Faced with high funding costs, weak [Eurozone] banks are unable to recognize losses. This perpetuates uncertainty about the quality of their assets, hinders fresh private capital injections, and ultimately restrains credit. To reverse these dynamics, bank losses need to be fully recognized, frail but viable banks recapitalized, and non-viable banks closed or restructured.

This is exactly what created the “lost decade” in Japan by stifling credit growth for years. Loss recognition was not part of Japan’s banking culture, as loan officers consistently kept bad loans at par and refused to move to workout/liquidation. There was little room for new credit creation in that environment. 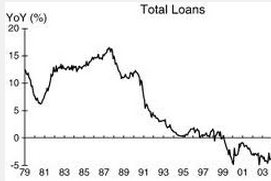 And now numerous banks in the Eurozone are facing similar issues. Failure to recognize losses combined with new Basel III requirements has created Japan-style credit stagnation. The latest data from the ECB shows such weakness in loan growth that even some of the more pessimistic Eurozone economists have been surprised. 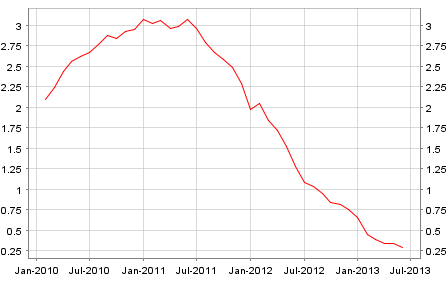 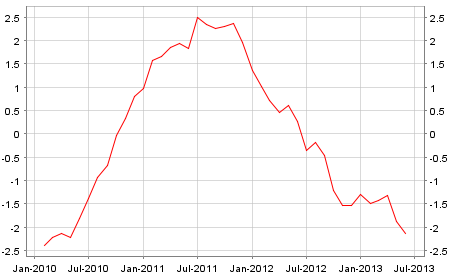 In order to have any hope of a sustained economic recovery, the euro area’s leadership needs to take some decisive action now. That may include recapitalizing or shutting down banking institutions. Allowing the banking sector to sustain itself via the ECB funding while maintaining the appearance of being sufficiently capitalized in the face of deteriorating loan portfolios will undermine economic growth for years to come. The Eurozone could be repeating the costly mistakes of the Japanese banking system of the 90s.

The Economist: – Banks are central to Europe’s prospects. The fear, especially in peripheral economies, is a repeat of Japan’s experience in the 1990s, when “zombie” banks staggered along for years, neither healthy enough to lend to firms nor weak enough to collapse. There are the same unvital signs in Europe. The average price-to-book ratio for European banks remains below one, suggesting that investors think lenders are worth more dead than alive. In America, where banks were recapitalised quickly, the ratio exceeds one. Italy’s two big lenders, UniCredit and Intesa Sanpaolo, have ratios of 0.34 and 0.42 respectively.

The suspicion of European lenders is well-founded. The amount of shaky loans keeps climbing: worryingly, there are more non-performing loans in the Italian banking system than there is core “Tier-1” capital. Lots of peripheral banks have been loading up on their own governments’ bonds: Portugal’s three biggest banks increased their holdings of Portuguese sovereign debt by 16% in the first quarter of the year. Mortgages account for even more bank assets’ and house prices keep falling—at the fastest pace on record in Spain in the first quarter.

Negative free cash flow in Europe, slowing in China and the US, scandal in Spain, and telecom consolidation