Barclays Capital had a sobering update on India today. Apparently June saw the largest outflows on record from India bonds and equities portfolios. 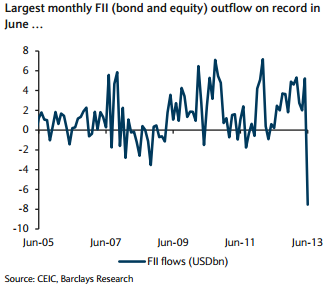 As a result, declines in India’s foreign reserves are becoming material. 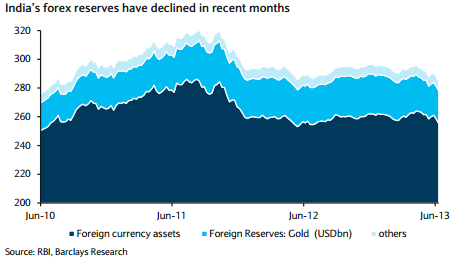 Moreover, India’s gold holdings constitute a significant portion (more than other countries) of the nation’s reserves. And the recent declines in gold price have not yet been included in the official numbers (not in the chart above).

While the reserves a currently sufficient to defend the currency if the RBI chooses to use them, these recent declines will probably make them hesitate. India has other tools it can deploy, should the officials decide to become more aggressive in defending the currency.

Barclays Capital: – … government officials are likely to use other policy options to stem INR weakness, including further liberalisation of the financial account (eg,reducing restrictions on debt purchases by foreign investors and relaxing FDI limits) in an effort to support sentiment. Most recently the Securities and Exchange Board of India (SEBI) announced measures to reduce speculative INR trades “in view of the recent turbulent phase of extreme volatility”, which are likely to help stabilise the currency to some degree. In consultation with the RBI, SEBI has instructed relevant exchanges to reduce client position limits and increase margin requirements for currency derivatives.

Therefore for those concerned that the central bank will be forced to sell gold, at this stage there are a number of other alternatives. And given the nation’s cultural attitude toward gold, politically that’s just not an option. Nevertheless in the near-term the currency remains vulnerable to capital outflows, should confidence deteriorate further.