Mortgage backed securities (MBS) have sold off sharply over the past month as fixed income markets face the new reality of rising rates. 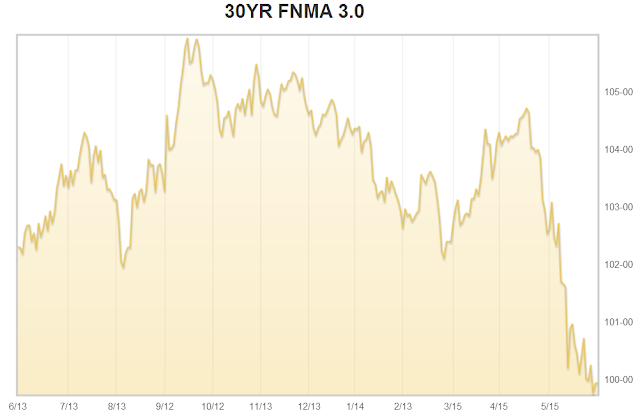 But unlike most other fixed income securities, MBS duration tends to increase with yield. That’s because higher MBS yields typically mean higher mortgage rates and lower mortgage refinancing activity (which we have already seen). Pools of mortgages backing many MBS, particularly loans with lower coupon, will experience slower prepayment speeds going forward. Slower refinancing extends the effective duration of the bonds (illustration below). 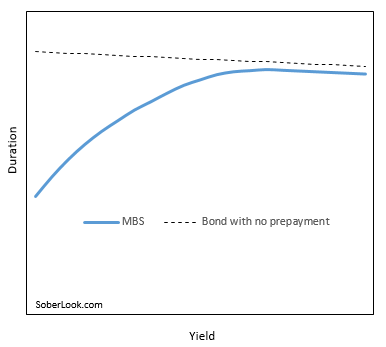 If you have a 30-year mortgage at 3.6%, it is now less likely you will refinance any time soon (mortgage rates today are above 4%). One reason your mortgage is not treated as a full-term 30-year note is the probability that you will sell your house, thus terminating the note. There is also some probability that in the future, mortgage rates will drop below 3.6% again, providing you another opportunity to refinance. The expected average life of your 3.6% mortgage and the security that is backed by your loan has therefore been extended (from you potentially refinancing in the next six months to you selling your house in say 5 years). And if rates rise further, prepayments will slow even more. The chart below shows the prepayment speed (PSA) for just such a security over the past month as well as the expected prepayment speeds going forward. It also shows what happens if rates increase by another half a percent. 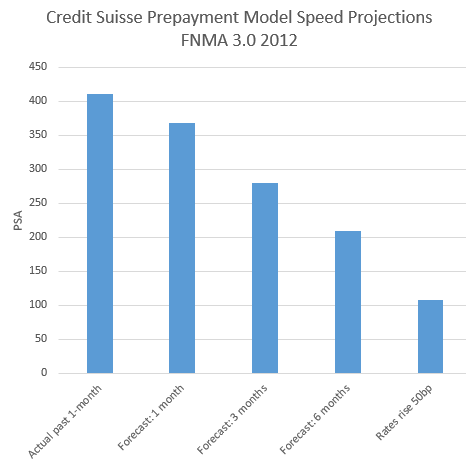 What does this mean for investors who hold MBS or actual pools of mortgage loans? They own securities that become riskier (more sensitive to rates) as rates rise. These portfolios have what’s often called a “negative convexity” risk profile. To combat rising durations of their portfolios and therefore higher exposure to rates, many investors now have to short longer dated treasuries or rate swaps. And until recently many MBS investors haven’t been doing much hedging because the hedge (the treasury short positions) has consistently lost them money. Now many are jumping in – all at the same time – to put the hedges on. And that hedging is putting downward pressure on treasuries (upward pressure on yields).

Bloomberg: – As rates increase, the expected average lives of mortgage bonds and loan-servicing contracts extend as potential refinancing drops, leaving holders more vulnerable to losses from rising rates. Investors then may seek to pare the duration risk or rebalance existing hedges by selling longer-dated Treasury securities, mortgage bonds or transacting in interest-rate swaps or options on those contracts, sending yields even higher and spreads wider.
…
One measure of duration of agency mortgage bonds rose to 4.8 years last week from 3.7 years in April, Barclays index data show. The duration of Fannie Mae (FNMA)’s 3.5 percent debt, which is now 6.2 years, would rise to 7.8 years if rates rise 1 percentage point, according to Bloomberg’s prepayment model.

This mortgage-driven rise in rates happened before – in 1994 and again in 2003. The act of shorting (selling) treasuries increased yields, raising MBS durations and forcing more treasury selling. Some have referred to this market dynamic as the “convexity hedging spiral”. 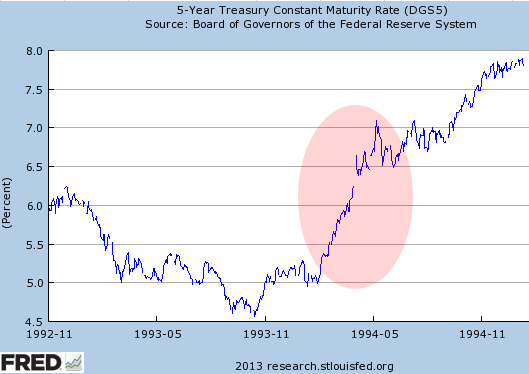 Of course this is not 1994 (or 2003 for that matter.) At least for the time being, the Fed is still buying massive amounts of both MBS and treasuries. And all that buying limits the impact of convexity hedging. Treasury sellers that want to hedge portfolios always find one large buyer with “deep pockets”. Furthermore, all the MBS held by the Fed is not getting hedged. With no requirement to mark the book to markets, the Fed is fine taking losses on that portfolio.

Bloomberg: – “The actual convexity hedging flows will be less when rates rise this time than it was in the past,” Dominic Konstam, the global head of interest-rates research at Deutsche Bank … The hedging “was massive in 2003, and we won’t see a repeat of that. With the Fed holding so much of the mortgage paper, it really knocks down the amount of mortgage hedging needed when yields rise.”

What will happen once the Fed ends its program however is anyone’s guess.

Mobile is driving merger mania and consolidation in the TMT space