Chart of the day: Does this violate key principles of money creation?

The chart below shows a clear divergence in trends of the total loans and leases on US banks’ balance sheets and the broad money supply measure (M2). Loan balance growth is slowing, while the money supply keeps growing at a steady rate of around 7%. 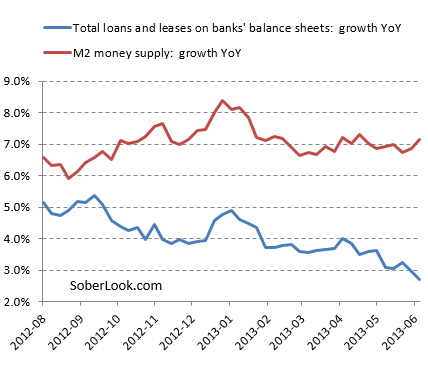 This is enough to give some economists nightmares. That’s because they may view this divergence as a violation of principles they hold dear. Many still believe that bank loan balances and M2 money supply have to be tightly linked because the creation of deposits (the money supply) is entirely tied to lending. And this chart shatters that belief.

But in spite of the divergence in the chart above, the “loans create deposits” axiom still stands – deposits are still created through bank credit. What’s at play here is shadow banking. Two key developments explain much of this divergence without violating these principles.

1. Loans on banks’ balance sheets do not represent the entirety of credit creation. Loans originated by banks increase deposits, but banks often sell some loans into the shadow banking system, such as Fannie and Freddie. A material portion of these mortgages then ends up back on banks’ balance sheets in the form of Agency MBS. These securities are exempt from the Volcker Rule, allowing banks to hold substantial amounts. That process reduces total loan balances without reducing deposits, thus contributing to the divergence in the chart above. 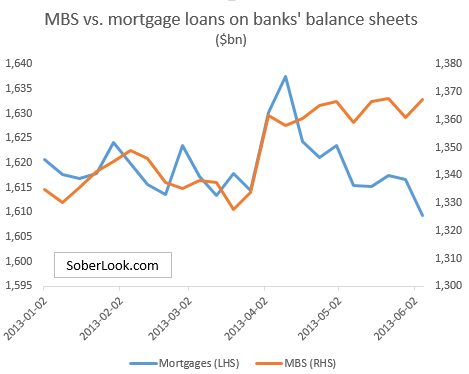 2. As discussed before, M2 includes another form of shadow banking – retail money market funds. These funds have seen their AUM rise recently due to increased risk aversion, particularly in fixed income (see last chart in this post). That development has added to M2 growth without increasing loans on banks’ balance sheets.

So our friends in the economics profession should be able to sleep well at night. The divergence between the trajectories of M2 money supply and bank loan balances has explanations that do not violate key principles of money creation.