Sneaking a pension provision into a US transportation bill

With all the talk about mark to market accounting, nobody seems to care that US pensions do not use these accounting principles when determining the present value of their liabilities. Pensions mark to market their bond portfolio based on current rates and spread levels (i.e. current yield/spread curve). However liabilities are discounted using a 2-year average of the investment grade corporate curve (see attached document for the latest rates). That means that pension liabilities are currently undervalued relative to pension assets because rates have come down so sharply in the past two years.

One would think however that in the next two years this problem should correct itself as low rates get reflected in the average. As the 2-year average starts including these low rates and liabilities become worth more on a present value basis, an increasing number of pensions will become underfunded and corporations will be required to inject more capital. And that in fact has already been taking place.

Treasury and Risk: – Corporate contributions to defined-benefit pension plans have been rising, reflecting the damage done to plan assets by the financial crisis and recession and the boost to plan liabilities that results from record low interest rates. A study published last fall by the Society of Actuaries showed that in the decade that ended in 2009, companies’ cash contributions to their plans averaged about $66 billion a year. The study estimates that minimum required contributions will average $90 billion a year in the decade that started in 2010 and hit a peak of about $140 billion in 2016.

But no worries – the corporate pension lobby was able to get to the US politicians before the really low rates got into the average. And the politicians snuck in a little provision into (of all places) the Transportation Spending bill that was recently passed by the US Senate changing the rolling 2-year averaging into a 25 (twenty five) – year average. Rates of course were significantly higher in the past 25 years than they are now and will likely be in the next few years.

MERCATUS CENTER AT GEORGE MASON UNIVERSITY: – The provision in the Senate-passed version of the Transportation bill currently under consideration in the House would allow corporations to use a 25-year average rate as opposed to the current 2-year average, increasing the current discount rate from the 4 percent range to roughly 6 percent. Since liabilities are sensitive to discount rate assumptions, the plan’s liability will change roughly 15 percent for every one percentage point change in the discount rate. For example, Boeing reports that a mere quarter of a point increase in the discount rate could cut its pension liability by $1.7 billion. Apply a small discount rate hike across all private plans and it’s easy to see why corporations are lobbying Congress for a discount rate boost.

All of a sudden pensions will no longer look underfunded. Accounting magic! 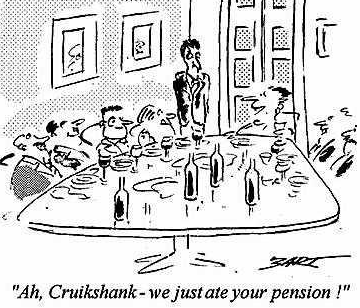 While the House has thus far failed to bring the Transportation bill to the floor for a vote, our best guess is that Congress approves a bill that includes these pension funding rules in the next month. Congress considers the Transportation bill “must-pass” legislation; part of the funding for it in the Senate bill comes from increasing employer premiums to the Pension Benefits Guaranty Corporation and there has been limited pushback on this in the House. This makes it likely pensions will be a component of any Transportation bill that is passed. With the current funding authorization expiring at the end of this month, therefore, we view it likely that a bill is passed that includes new rules on

Why do we care? Again, the taxpayer is very much at risk here. As discussed before, the US pension bailout fund PBGC is already stretched and may require more taxpayer money. Now it would be taking over pensions that will be even more underfunded, with asset values way below the present value of the liabilities. And more of taxpayers’ money will be used to fund the benefit payments.

Chart of the Day: The smoking gun showing how the ECB wrecked the Spanish economy

Venezuela: Taking it to the streets in Caracas