JAY FELDMAN : Q4 GDP revision is now tracking 2.4 on our estimates. It was tracking 2.7 before retail sales… and down from the initially reported 3.2.

Note October/November/December all marked down lower as well in US retail sales…and even prior to this period as well – will bring down Q4 GDP tracking for consumption.

Again, the income to support sales just doesn’t seem to be there, as the sub 3% federal deficit doesn’t seem to have been providing the spending needed to offset the demand leakages (unspent income):

Highlights
Overall retail sales in January fell 0.4 percent, following a decrease of 0.1 percent in December (originally up 0.2 percent). The market consensus was for a 0.1 percent dip.

The latest report suggests that fourth quarter GDP may be revised down and that first quarter GDP could be soft. Again, atypically adverse weather likely affected the data. Equity futures declined on the news. 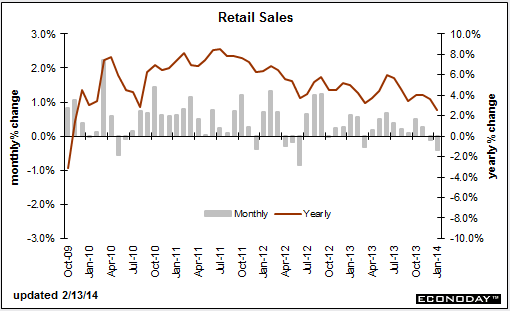 When I squint at this chart if anything it seems to have bottomed and nudging irregularly higher: 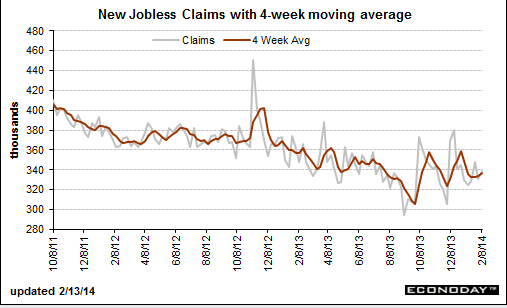 Ukraine on the brink