The thesis of China facing weaker nearterm economic growth is widely accepted at this point.  Moreover, the slowdown in the nation’s manufacturing sector this month (see chart) has provided some support for this view. But as we have seen in recent years, it could be a temporary correction related to some seasonal patterns. Given the difficulty in obtaining reliable data out of China, what other evidence do we have that the nation’s economy is actually slowing? Here are four signs that seem to support the “slowdown”  thesis.

1. For the first time China’s “insiders” are calling for weaker growth:

WSJ: – China’s state media have long accused foreign analysts of being too bearish on the Chinese economy. Those analysts looking in from the outside are often said to be too eager to be “chanting decline”—chang shuai—when it comes to the economy’s prospects.

This time around, China’s own economists seem to be chanting a pessimistic tune about growth prospects. Perhaps they are not quite as negative as those pesky foreign counterparts—who according to at least one report China’s state media are being told to avoid—but they are increasingly outspoken about slowing growth and rising financial risk.

“We are now in a painful stage,” economist Wang Luolin told a seminar this week. “Let’s not try to dress things up,” said the consultant to the Chinese Academy of Social Sciences, a government think tank.

Yu Bin, a senior researcher at the influential Development Research Center under the State Council, took a similarly pessimistic view.

“The fact is, China’s economic growth is facing substantial downward pressure,” he said. “I don’t think we should get our hopes up for this year’s growth.”

2. The nation’s central bank has once again halted the currency appreciation. The authorities tend to do this during periods of economic uncertainty in order to provide some support for China’s exporters.

3. Australian coal prices have been under some pressure – mostly due to mediocre demand from China.

Similarly iron ore price has been weaker recently, with China having stockpiled massive amounts of the commodity (inventories at highest level since 2010). This could be an indication of slack in industrial demand.

4. Perhaps the most significant indicator of slowing growth in China is the decline in longer term interest rates combined with an inverted yield curve. 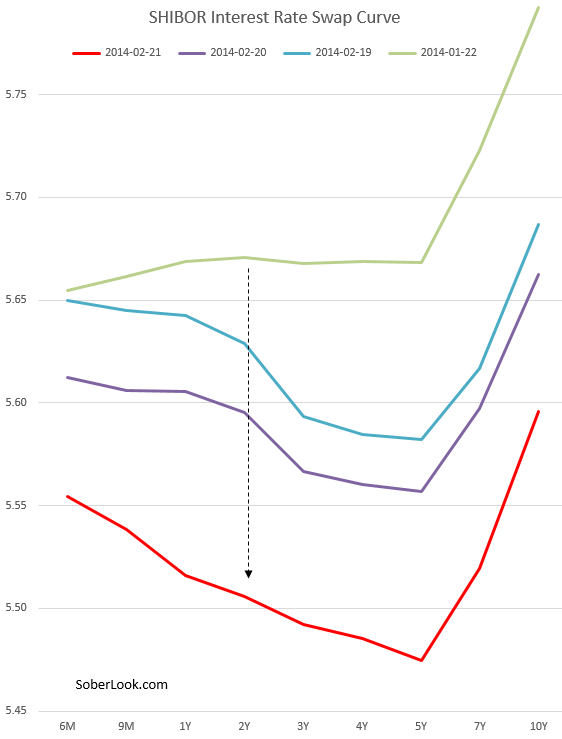 Why is the yield curve inversion (short term rates higher than long term rates) so important to watch? In many countries an inverted yield curve is often a harbinger of an economic slowdown. Just to put this in perspective, here is what the US yield curve looked like in the middle of 2007 (about six months before the start of the Great Recession). 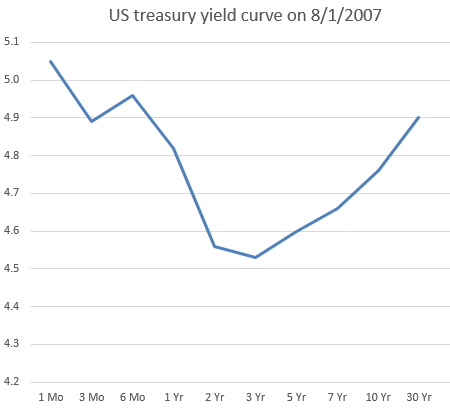 Of course nobody is calling for a major recession in China, but a slowdown looks increasingly likely.