Household income in the U.S. remains well below pre-recession levels

One of the key reasons for the mediocre economic growth in the US has been the ongoing weakness in household wages. As the chart below shows, US median inflation-adjusted household income (red line) remains well below pre-recession levels (the chart also appropriately shows U6 unemployment).

A large part of this wage dislocation can be explained by significantly higher use of part-time labor in the US. The chart below shows the ratio of part-time to total payrolls which remains elevated. 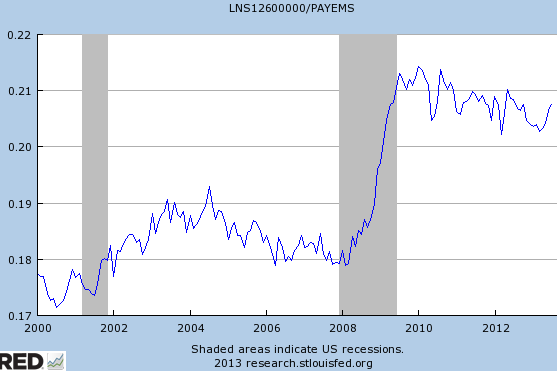 Furthermore, a good part of the US job creation over the past couple of years has been in the low wage sectors. That, combined with the part-time employment trend (above) keeps household wages from rising substantially in spite of lower unemployment figures.

The cheaper labor costs in the US and the recent increased use of part-time workers have significantly improved corporate bottom lines. Some US labor advocates argue that over the years corporations have been able to participate in the overall economic growth in part at the expense of lower wages (chart below). The counterargument of course is that this wage compression is critical for US-based firms to remain competitive globally and should ultimately result in more US-based business activity and hiring, particularly in manufacturing (see post). While we’ve seen more firms moving facilities to the US, it has not been the panacea some have been hoping for.

Barclays Capital: – During the recession and the subsequent recovery with its weak growth, companies have been aggressively managing their bottom line. They’ve refrained from hiring, raising pay or otherwise investing in business expansion. Compensation as a percentage of GDP has been falling since the end of 2008 and now stands close to a 13-year low.

Moreover, some are suggesting that the Patient Protection and Affordable Care Act will ultimately result in even higher ratios of part-time employees – and therefore lower household incomes. While there is little evidence for this currently (see Bloomberg analysis), longer term effects remain uncertain. Whatever the case, with wage growth suppressed and consumers still driving over 70% of the nation’s GDP, weak economic growth should not be a surprise.

The agency problem and how to create a criminogenic environment