The US Student Loan Problem

The US Congress is nearing a compromise on the issue of student loan interest rates. Apparently loan rates will be changed from fixed to floating with an overall cap (see story). While rates are important, there is a much bigger issue at hand. Now with the help of some great data from Barclays Research let’s take a quick look at where we stand with the overall student loan problem and how we could potentially move forward. Here are six facts to consider:

1. There is about 1.2 trillion dollars worth of student loans outstanding with all but 15% of that owned or guaranteed by the government. The chart below shows the student loan amount held directly by the federal government. That balance is rising at about $110 bn per year. 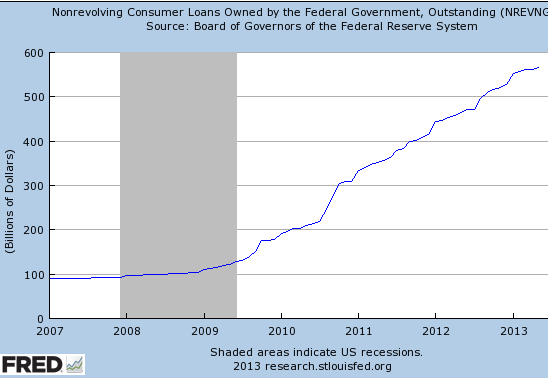 2. Higher education still provides a clear financial edge, with the unemployment rate among college graduates at about half that of those with just a high school diploma. However when you add student loans into the mix, the financial advantage of college graduates is not as compelling. For example, while homeownership has declined across the board, the decline has been much sharper for those with student loans.

3. Not surprisingly, since 2008, the credit score of young people with student loans increasingly lags the score of those without this type of liability.

4. Based on the expected repayment schedule of outstanding student debt, an increasingly large volume of loans is forecast to be repaid each year. Yet since 2007 the actual repayments keep falling further behind the repayment expectations. Based in this trend, the situation for 2013 looks a bit scary.

5. Student loans now have the highest delinquency rate among all major consumer credit asset classes. Based on the latest data, the trend isn’t encouraging.

The data clearly shows that the risk to the taxpayers is on the rise and the strain on US consumers from student loans isn’t going to improve any time soon. The unlimited availability of student loans has allowed colleges to sharply raise tuition and fees over the past few years – often simply because they could (as they kept on hiring). The rising cost of higher education in turn forced students to take out larger loans and in greater numbers, increasing the overall loan balances. This feedback loop is clearly unsustainable, particularly as household income growth remains weak. Higher delinquencies are inevitable and as long as the government funds this program, there really is only one way to arrest rising levels of student debt.

Consider the fact that the pay increases of Social Security recipients in the US are linked to the inflation rate. Of course the actual inflation rate that retirees experience is often higher than it is for younger generations. Pension recipients don’t benefit to the same extent from declining prices of electronics, apparel, and a number of other products. Furthermore, the planned adjustment to increases using the so-called “chained CPI” will make the pay increases even smaller (see story). But American seniors on Social Security will have to make due.

Why then is it so difficult to ask US colleges and universities who benefit from taxpayer-funded loans to live by the same standards as the social security recipients? The US taxpayers should insist that any college with students who pay using federally backed student loans must agree to cap tuition and fees. It’s time for institutions of higher learning to start living by the concept of “chained CPI” rather than to simply keep writing research papers on the topic.

How the United States gets deflation and becomes the next Japan

The changing debate over China’s economy