China’s consumer confidence declined sharply in May to 99.0 from 103.7 in April. Of course household spending in China represents only around 35% of the GDP (according to the World Bank), while the US consumer is over 70%. Nevertheless taken together with China’s manufacturing PMI, we may be seeing signs of renewed economic weakness. 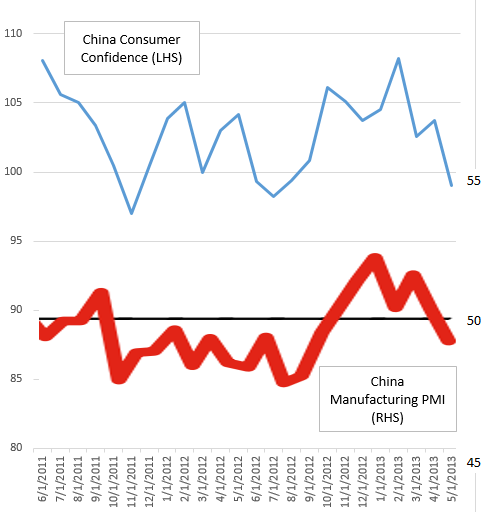 China’s stock markets also sold off in the last few weeks (now at a 6-month low). These are all indicators of potentially slower growth ahead. And slower growth poses a number of risks that have been masked by the nation’s booming economy. One of the key risks of course is the size and health of the shadow banking system. Fitch in particular has been ringing some alarm bells with respect to China’s private credit growth.

Forbes: – With a shadow banking system that is becoming increasingly prominent, the rise of bundling of assets and securitization, and an acceleration of policy tightening, over-indebted local governments and institutions will feel the pain of a rising cost of capital, prompting Fitch Ratings to raise red flags about the future growth prospects of the Chinese economy. At Nomura, where they noted that liquidity tightening is dangerous in a highly leveraged economy, they increased their probability that a risk scenario could push GDP growth below 7% this year, threatening social stability.
…
A major problem is that much of this incredible surge in credit has been channeled through the shadow banking sector, which is very closely connected to the banks. Total non-loan credit hit $5.6 trillion in 2012, with nearly $2 trillion of that credit extended by opaque non-bank financial institutions, Fitch’s research shows. Furthermore, more than $2 trillion were connected to informal securitization of bank assets in so-called wealth management products (WMP).

Perhaps the most ominous indicator of China’s potential slowdown is the nation’s inverted long-term interest rate curve. The chart below shows the latest quotes on domestic interest rate swaps. Inverted yield curves often signal an economic downturn in the near future. 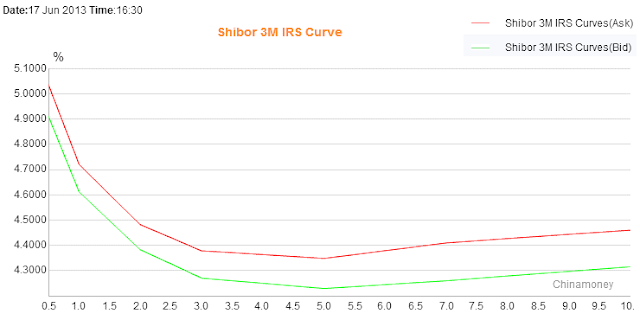 Just to put things in perspective, this is what the US treasury curve looked like about 9 months prior to the start of the Great Recession. 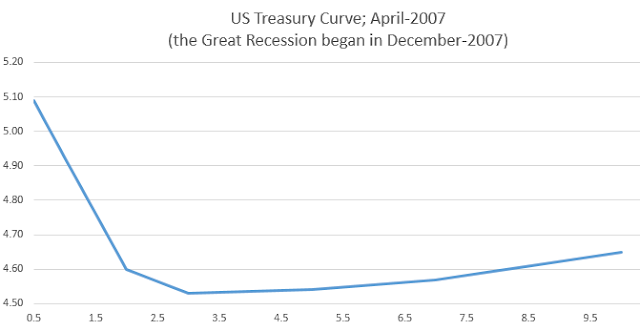 The biggest worry in the global economy now is emerging markets, particularly China