Banks can benefit from steeping yield curve though headwinds remain

The treasury curve has steepened materially over the past few weeks, driven by Bernanke’s seemingly hawkish statements. One group of companies that will benefit from this adjustment is the banking sector. 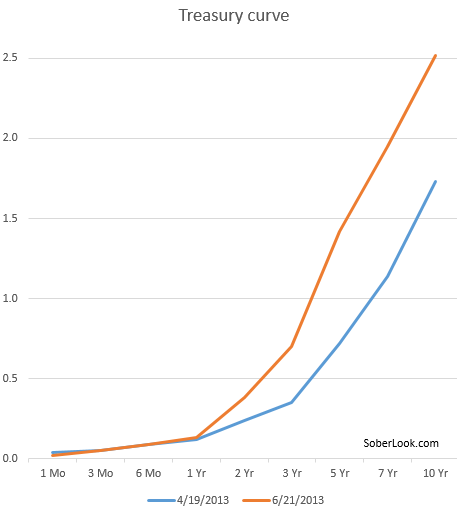 In fact bank shares have been outperforming the broader market by a significant margin – over 6% in the past couple of months. The reason is simple. Given the short end of the curve has not budged, banks will continue to pay next to nothing on deposits. But they can now charge much higher rates on new term loans they make. That spread increase (net interest income) will flow right into equity and juice up bank dividends. Bank shareholders and executives should thank Bernanke for this “gift”.

But there are headwinds appearing on the horizon for the banking sector that may negate some of these gains. Here are a few examples:

1. A portion of bank revenue has been generated from mortgage refinancing in the past couple of years. But that game is over (see post) and the refi fee revenue will no longer be there. We’ll let our friends who analyze bank shares quantify that number, but it can’t be immaterial.

2. With rates rising, loan demand in the corporate sector may in fact decline. We are already seeing evidence of that. 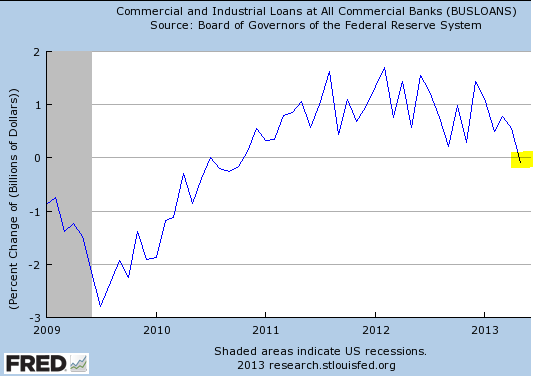 On top of reducing origination fees and asset growth for banks, this trend could easily result in slower economic growth, which has been quite fragile to begin with.

3. Treasury and agency securities make up about 10% of bank assets. Even though not all of these securities will get marked to market, the recent bond correction can’t be good for the old P&L. Customer flows in fixed income departments of banks will also decline materially.

4. New regulatory pressures could create tremendous headwinds for the larger banks and could even result in dividends being shut off for years to come as banks are forced to build up capital.

Bloomberg: – U.S. regulators are considering doubling a minimum capital requirement for the largest banks, which could force some of them to halt dividend payments.

The standard would increase the amount of capital the lenders must hold to 6 percent of total assets, regardless of their risk, according to four people with knowledge of the talks. That’s twice the level set by global banking supervisors.

For those who think banks haven’t been lending enough, just wait till such rules go into effect. We will see an outright credit contraction in the US.

Given these headwinds in the banking sector, one should be careful jumping on the bank shares bandwagon. There may be some nasty earnings surprises along the way. And with banks under pressure, those who are predicting the US GDP to grow at 2.5% or higher should go back to the drawing board.

QE, the expectations fairy and other bedtime stories