Expats’ leaving China in droves is a bad economic signal

Anecdotal evidence suggests that increasing numbers of western expats are beginning to leave China. A recent article that has gone viral in the expat community in China called “Why I’m leaving the country I loved” describes some of the reasons. Mark Kitto provides a blistering critique of the Chinese Communist Party and China’s treatment of foreigners.

Prospect: – … Nor is the Chinese Communist Party entirely averse to condoning slavery. It has encouraged its own people to work like slaves to produce goods for western companies, to earn the foreign currency that has fed its economic boom. (How ironic that the Party manifesto promised to kick the slave-driving foreigners out of China.) And the Party wouldn’t know a legal system if you swung the scales of justice under its metaphorical nose. (I was once a plaintiff in the Beijing High Court. I was told, off the record, that I had won my case. While my lawyer was on his way to collect the decision the judge received a telephone call. The decision was reversed.)

Besides some of the reasons specific to China, expats leaving a nation can be a leading indicator of weaker economic growth. For example the number of expats in Japan apparently also declined in the 90s, although exact numbers are difficult to pinpoint. What is clear however is that a bubble economy often creates unrealistic expectations about future growth, attracting capital and talent. And when the bubble bursts, years of sub-par growth ensue.

Prospect: – When the bubble pops, or in the remote chance that it deflates gradually, the wealth the [China’s Communist] Party gave the people will deflate too. The promise will have been broken. And there’ll still be the medical bills, pensions and school fees. The people will want their money back, or a say in their future, which amounts to a political voice. If they are denied, they will cease to be harmonious.

If Japan is any indication of such an adjustment, the correction could be severe indeed. After the peak in the 90s and the subsequent decline, the nation’s GDP growth has never recovered. 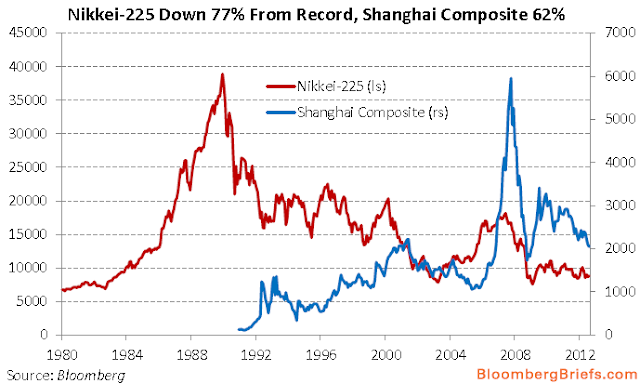 Clearly, the differences between these two nations’ economic paths are great. But just as the decline in the stock market, this expat exodus from China – if it is indeed occurring – should be taken seriously.

Daily: More on QE3 and the Fed’s dovish turn