USA Debt Crisis: Is There Any Truth?

by Steven Hansen and John Lounsbury

Last week the NY Times covered the division within the economic community over the way out of the USA’s overspending / balance budgeting.

“Reasonable people can sit down and, apart from any political or policy motivations, come up with different answers,” said Robert S. Chirinko, a finance professor at the University of Illinois at Chicago who studies corporate taxation.

No doubt this is true.  The economic community’s solutions range from more deficit spending stimulus (on the theory that boosting the economy will boost tax revenues to balance the budget) to  out-and-out cutting spending (on the theory that re-balancing, while causing short-term pain, will spur long-term growth).  Both extremes have some basis in main stream economic studies.

The economic objective is to find the best path through this crisis causing the least disruption and unintended consequences.  These headline economists are macroeconomists who specialize in studying and modeling the economy as a whole – studying the forest, not the individual trees.

The unanswered question in macroeconomics is whether the past economic responses to economic management will work in the current situation.   There are many forces which effect an economy – and no two situations are the same.

Much work published in Econintersect analysis looks at the trees, and not the forest.  On the issue of USA debt – it seems like most macroeconomic models are ignoring many trees.  Some of the trees ignored are:

Econintersect endeavors in its analysis articles to provide facts for readers to form their own opinions – and not accept the soundbites from dogmatic groups.  Economies are complex, and, at this point, no good solutions exist where you can have your cake and eat it too.

And the disagreement between economists goes beyond political bias, at least in some cases.  One example is theGreat Debate© between Casey Mulligan (University of Chicago), who argued for lower taxes and less government spending and Menzie Chinn (University of Wisconsin), who took the other side.

In the NYT article it is pointed out that there are also a variety of opinions about the relative magnitudes of tax change impacts on GDP.  And, to go further, not all taxes are created equal when the effects on growth are estimated.  From a GEI Analysis article published last fall, the following graphic shows just how widely different various tax rate impact estimates can be. 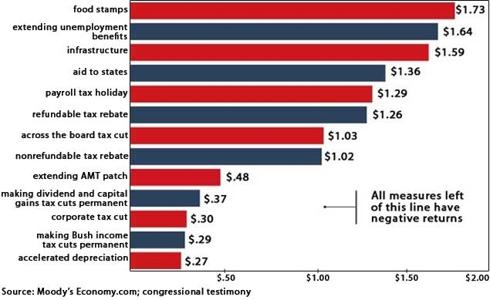 It depends where the taxes come from just how much the effect may be.  And then the discussion can swing back to the Mulligan/Chinn debate.

Finally, that brings us to the excruciating grind that is the debt ceiling negotiation in Washington.  From a GEI News article about the Gang of Six plan:

Which of the proposals will be the hardest to reach agreement on in the broader Capitol Hill community? The opinions vary. The Christian Post suggested it might be the repeal of the AMT (Alternative Minimum Tax). The Huffington Post said it might be a standoff between the right and the left over tax increases and benefits cuts, respectively. TheWall Street Journal editorial of July 23 gives two impediments: (1) Deeper cuts are needed to pass the House; and (2) The president is grandstanding.

GEI Editor’s note: We find it curious that no other grandstanding was mentioned.

The bottom line is given by the NYT:  "The lack of definitive answers reflects the reality that economics is not a hard science."  That means that any policy implementation is entirely an experiment, in spite of what any proponents or opponents proclaim.  And, of course, just who is experimenting (or grandstanding) and who knows what they are doing is often entirely in the eyes of the beholder.  With all deference to the wisdom of Prof. Chirinko, the final decisions may not be made by reasonable people, apart from any political or policy motivations, who compromise between different answers

TheGreat Debate©: Stimulus – Supply Side or Demand Side by Casey Mulligan and Menzie Chinn

Accelerators and Brakes by John Lounsbury

What and How Do Business Economists Think? by Menzie Chinn