Harold Meyerson, Op Ed Columnist at The Washington Post, has hit the nail right on the head, in the opinion of GEI. Meyerson says the debate about whether the recession and poor recovery is a cyclical problem or a structural problem is misguided. He says the problem is institutional – – – and is he ever right!

In a column a week ago, Meyerson points out that the devastation of The Great Recession has fallen disproportionately on the blue collar population, those without a college degree. And he traces the rolling over of median family income in this century, not just in the downturn, but since the turn of the century. Even at the peak, in 2007, median family income was less than in 2000.

What Meyerson doesn’t point out is that average incomes have faired better in the 21st century and in all of the past 50 years. In fact, average family income has risen more than 2.5 times as much and median income over the last 30 years. Why is this important? Because the more there is a fat tail of ever higher incomes for a few, the greater the difference between average and median income becomes.

The great sociologist William Julius Wilson has long argued that the key to the unraveling of the lives of the African American poor was the decline in the number of “marriageable males” as work disappeared from the inner city. Much the same could now be said of working-class whites in neighborhoods that may not look like the ghettos of Cleveland or Detroit but in which productive economic activity is increasingly hard to find.

This grim new reality has yet to inform our debate over how to come back from this mega-recession. Those who believe our downturn is cyclical argue that job-creating public spending can restore us to prosperity, while those who believe it’s structural – that we have too many carpenters, say, and not enough nurses – believe that we should leave things be while American workers acquire new skills and enter different lines of work. But there’s a third way to look at the recession: that it’s institutional, that it’s the consequence of the decisions by leading banks and corporations to stop investing in the job-creating enterprises that were the key to broadly shared prosperity.

Since Meyerson has chosen income disparity as a cornerstone of his argument, let’s look at how incomes have grown over the last 50 years. These are shown in the following graph, not adjusted for inflation. 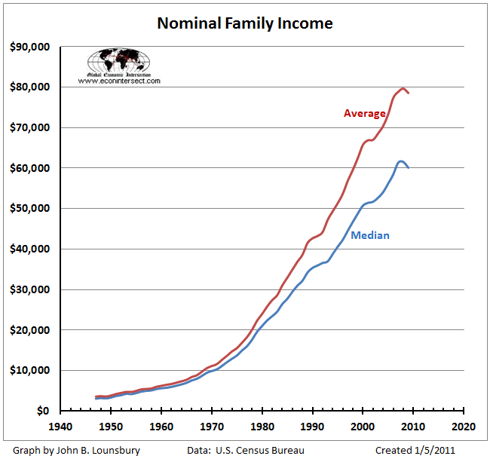 Real median income and average income seem to grow similarly in the 1950s and 1960s, the growth of average income starts to pull away in the mid-1960s and appears to continue to gain gound for the the next 40+ years. The more average income deviates from median income the more money is found in the high income tail on the distribution curve. This is often called a “fat tail”, which is very appropriate in this discussion because that is where the fat cats are. The fat tail has not gotten so because ten times as many people equaled the incomes of the former fat cats, but more because a few fat cats have received 10 times the income. This is exemplified by the often quoted statistic that average CEO salaries were 40x average worker pay 50 years ago and today are more like 400x.

The change income distribution that seems to be appearing in the above graph becomes more apparent in the following graph where real income gains are shown for the last six decades starting with the ten years from 1949 – 1959 (the 1950s) and ending with 1999 – 2009 (the 2000s). 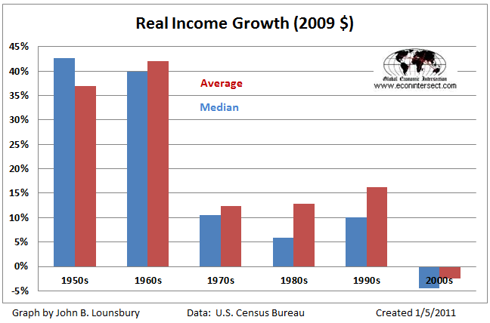 The 1950s and 60s were real boom years. Starting with the 1970s a lower level of income growth was established, but even that lower level could not be maintained in the 2000s.

After the 1950s every decade has seen average real income grow more than the median. The fat tail has got fatter over the past half century in every decade, without exception. Yes the average did decline in the 2000s, but the median declined 76% more! 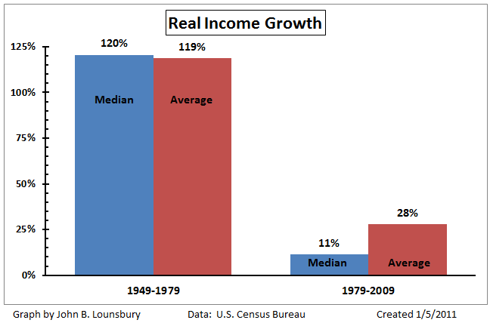 For thirty years after World War II the wealth of the country increased in a balanced manner. The average income containing the greater contribution from the top earners of the day, grew at a rate very similar to the income growth of the broader population, represented by the median.

Yes there were “fat cats” and they had significantly larger incomes than the bulk of the population. And these top incomes grew over those three decades, but at almost the same rate as the majority of the populace.

Then something happened. From 1979-2009 it appears that the American pie suddenly got smaller. In the later three decades the real median income growth was less than 10% of the rate seen from 1949 to 1979. And as the pie got smaller, the fat cats took a much larger share. The average income grew at a rate 254% that of the median income. You might say that, as the cow gave less milk, the top of the economic ladder skimmed more and more cream off the top.

Meyerson identifies the force majuere to be corporate America:

Our multinational companies still invest, of course – just not at home. A study by the Business Roundtable and the U.S. Council Foundation found that the share of the profits of U.S.-based multinationals that came from their foreign affiliates had increased from 17 percent in 1977 and 27 percent in 1994 to 48.6 percent in 2006. As the companies’ revenue from abroad has increased, their dependence on American consumers has diminished. The equilibrium among production, wages and purchasing power – the equilibrium that Henry Ford famously recognized when he upped his workers’ pay to an unheard-of $5 a day in 1913 so they could afford to buy the cars they made, the equilibrium that became the model for 20th-century American capitalism – has been shattered. Making and selling their goods abroad, U.S. multinationals can slash their workforces and reduce their wages at home while retaining their revenue and increasing their profits. And that’s exactly what they’ve done.

Meyerson doesn’t get into some of the other areas that might be brought to bear on the current condition of the American economy:

Part of the problem is that Americans have fallen into the way of the easiest path, where, whether by accepting the dole, or by credit card or by making quick trades, the desires of the moment are satisfied with no seemingly current cost.

It seems that few want to think about the needs of tomorrow. This is true starting with the masses who kiss off the idea of working hard in school to prepare for what they will need 20 years down the road. This is also true of the “capitalist” who finds that skimming a few percent off each of many deals a year to get quick, large quarterly returns is much easier than investing and building something that will will make much larger returns extending over decades and producing things of real economic utility.

There are a number of things that Meyerson does not address, but if you want to hit one nail at a time, I think he has picked the baddest nail in the plank. He finishes his column thusly:

Our economic woes, then, are not simply cyclical or structural. They are also – chiefly – institutional, the consequence of U.S. corporate behavior that has plunged us into a downward cycle of underinvestment, underemployment and under-consumption. Our solutions must be similarly institutional, requiring, for starters, the seating of public and worker representatives on corporate boards. Short of that, there will be no real prospects for reversing America’s downward mobility.

If we were to address all the other issues I mentioned previously and did not address the institutional problem Meyerson has identified, we would not ultimately solve our economic puzzle.

Comments by Faber, Gross, Roach, and Grantham on the Political Economy

Where are we on growth and macro policy right now?