Five reasons the Fed’s taper will begin in September

Little doubt remains at this stage that the Fed will begin slowing its securities purchases this September. The central bank under Bernanke’s leadership has been highly focused on data and will consider the following 5 broad indicators to reach its decision.

1. Labor markets: As Bernanke recently pointed out, with respect to labor markets the hurdle for reducing purchases is lower than for raising rates. The FOMC will be looking for improvements in demand for labor in the US and will find it in these data:

While the labor situation is still terrible by historical standards, it will be sufficient for the FOMC who will be looking for steady improvements. The strength in consumer confidence (see latest from U Michigan) will also be viewed as supportive of the stronger labor markets thesis.

2. Money supply: Once again the view will be that broad money supply’s relatively steady growth of above 7% per year will suffice. 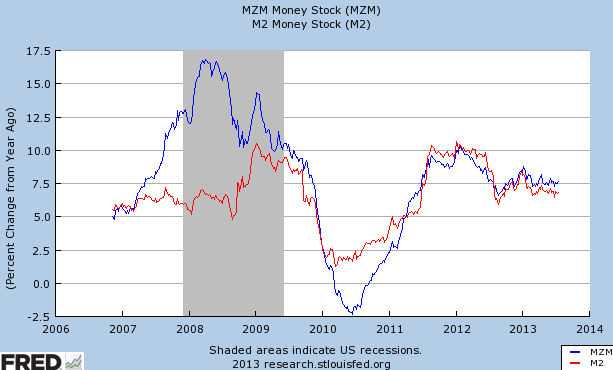 3. Economic activity: While a number of indicators have been pointing to less than stellar growth, the Fed will consider (among other measures) the broadest indicator, the so-called Coincidence Index of Economic Activity. The index hides numerous problems with the economy but will nevertheless be an important data point for the central bank. And based on this indicator, the US is experiencing sufficiently steady growth. To support the steady growth thesis, the Fed will also consider surprisingly strong auto purchases and factory orders data (see Reuters story). 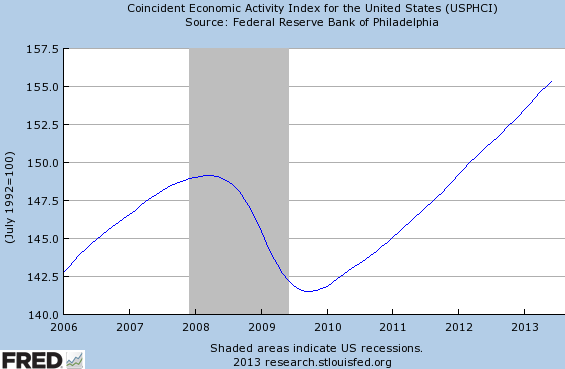 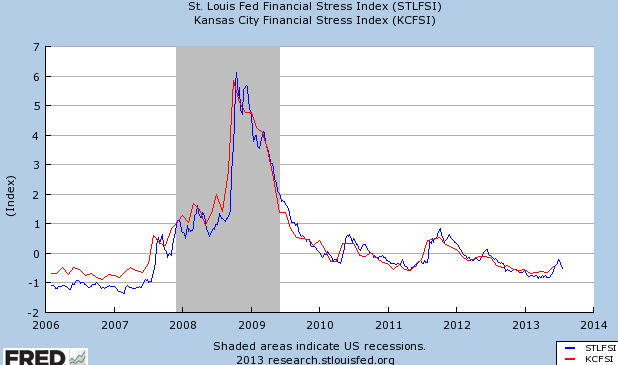 Supporting the US data on financial stress is the ECB’s “Systemic Stress Composite Indicator” (below), which has declined to near record lows. Given the impact of the Eurozone crisis on US financial markets, the Fed will clearly consider that index as well. 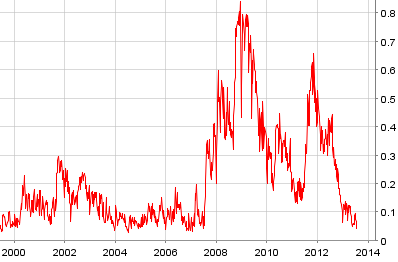 5. Impact on interest rates: Certainly with the Fed exiting treasury purchases, the demand for US government paper should will be reduced, pushing yields higher. But given the recent fiscal tightening in the US (due in large part to the sequester), treasury issuance is expected to decline – at least in the near term (chart below). The Fed will view this decline in the federal government’s borrowing needs as counteracting its reduction in purchases and keeping rates under control in the near term. 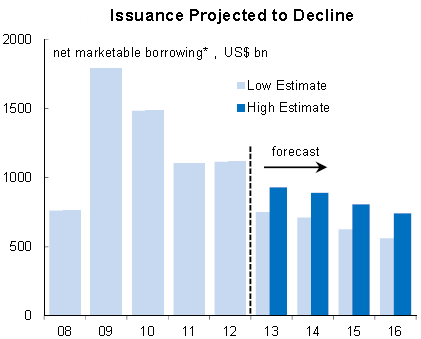 Obviously, an exogenous shock such as a spike in oil prices could force the Fed to hold off. Also the US legislators’ failure to raise the federal debt ceiling, which Bernanke called “a calamitous outcome”, could take tapering off the table.

CIBC World Markets: – Any attempts to tie a budget deal to a repealing of Obamacare could throw a wrench into discussions, while inflexibility on either side could push negotiations to the eleventh hour. And with federal borrowing pressing up against the limit, wrangling over the debt ceiling—an apparent late summertime tradition—is set to heat up yet again.
…
The Fed doesn’t seem to be quite as blasé as markets are at this point about budgetary pitfalls. Bernanke recently stated that fi scal policy could “restrain” growth and the debt ceiling outcome could “hamper the recovery”. With Washington getting down to the political wire right around decision time for QE tapering, political wrangling could infl uence just how willing the Fed is to step off the stimulus pedal.

Aside from such events, the Fed is likely to shave off some $15-$20bn from its monthly purchases. With Bernanke likely departing early next year, the Fed is eager to wrap up this latest round of purchases soon and focus on the more traditional policy tools such as short-term rates and forward guidance (see discussion).

Why Yellen should be the next Fed Chair