Anatomy of a bank run

In my last post, I argued that enforced separation of investment banking and commercial banking would not eliminate the need to provide central bank support to investment banks and other non-banks in the event of another Lehman-type collapse. There followed an extensive discussion in the comments, in the course of which it became apparent that many people simply don’t understand how bank runs work. So I thought I’d explain. 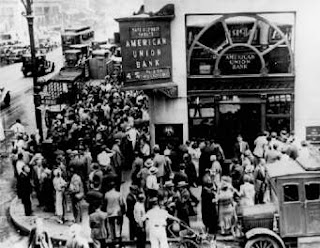 Queues of retail customers outside a bank, waiting to withdraw their money. But actually this sort of bank run is very rare. The run on the UK’s Northern Rock in 2007 was the only retail run in the financial crisis and the first in the UK for 140 years.

What is more frequent – and far more damaging – is a wholesale run. The Northern Rock retail run was preceded by a wholesale run that forced the Rock to go to the Bank of England for emergency liquidity assistance (ELA). And the wholesale run continued for the next five months despite ELA and government guarantees, only ending when Northern Rock was nationalised.

Wholesale runs occur when investors pull their funds all at once. “Investors” in this case means institutional investors and high net worth individuals. There were two major wholesale runs in the financial crisis, one in 2007 after BNP Paribas forced the closure of the Bear Sterns hedge funds by announcing that it could not value mortgage-backed securities used as collateral, and the other – much larger and potentially devastating – a run on tri-party and bilateral repo when Reserve Primary money market fund “broke the buck” after the fall of Lehman. It was this second run that very nearly brought down the entire financial system and forced central banks around the world to provide liquidity support not only to commercial banks but to investment banks and other “shadow” institutions.

The main risk with a classic retail run is that banks will simply run out of physical cash. The job of the lender of last resort, therefore, is to ensure that they don’t. And if necessary, of course, banks experiencing classic retail runs can simply shut their doors. Unfortunately that is far more difficult with a wholesale run. Wholesale runs do not involve withdrawal of funds in physical cash. They typically involve three phases:

These three phases may be concurrent or sequential. But they have different effects.

Financial institutions being “run upon” develop large holes in the liability side of their balance sheets and experience severe funding distress. However, if reliable sources of cash can be found – such as an effective lender of last resort facility – then the bank run can (in theory) be allowed to run its course: if plentiful liquidity is made available then investors may be reassured that their funds are not about to evaporate and the bank run may fizzle out.

Institutions being run upon have to find cash. Lots of it, and fast. If they cannot borrow, then they have to raise money by selling assets. Distressed asset sales by a number of institutions at the same time force down the market price of those assets. So a widespread run on shadow banks that cannot obtain liquidity support from central banks causes asset values to collapse. All asset classes are affected, including “safe” assets used by commercial banks as collateral for central bank funding. This is why the Fed provided liquidity support to shadow banks. It was supporting asset prices. And it continued to do so with QE and other unconventional interventions.

Collapsing asset values are disastrous not only for the financial sector but for the economy as a whole. If there was one thing that Lehman and its aftermath demonstrated, it was that the idea that investment banks can be “allowed to fail” if the result will be asset value collapse is sheer fantasy. Central banks have no choice but to support any financial institution caught up in a major wholesale bank run, whatever its status.

This is not to say that an insolvent investment bank should be bailed out by taxpayers. How we deal with imprudent financial firms that have got into difficulty is an entirely different matter from how we deal with a financial panic. I would be the last person on earth to suggest that governments should recapitalise or otherwise rescue failing investment banks. Indeed I am not keen on governments bailing out any sort of bank: government backstop without control encourages bad management and poor asset quality, which are the two biggest causes of bank failure. But denial of liquidity support to some institutions in a widespread bank run would be disastrous.

To my mind the Fed got it right in the crisis. It threw money at everything, regardless of its status, and by so doing, prevented a catastrophe. But the direction of discussion since, particularly in Europe, has been counterproductive. Cherry-picking which institutions qualify for central bank support is never going to make the financial system more robust. So my recipe would be: provide central bank support to everything and taxpayer support to nothing. And take steps to ensure that investment banks and commercial banks alike maintain good asset quality and defensive balance sheet structures.

Why I am relatively upbeat about Europe

With Apple’s earnings declining, emphasis is on returning cash to investors

How do you say “dead cat” in Latvian?