As a Canadian, perhaps I should feel a surge of patriotic pride now that Mark Carney has been designated the new head of the Bank of England – quite a step up for the current governor of the Bank of Canada.  There is no question that Mr. Carney is a market-savvy guy (he did, after all, work for the vampire squid), and his experiences as Chairman on the Financial Stability Board (FSB) suggests that he is sensitive to the ongoing systemic risks present in our increasingly complex global banking system.

That said, his recent attack on the Bank of England’s Andy Haldane in a Euromoney interview last month, does give one some cause for concern, particularly as it evinces the usual complacency that most Canadians seem to feel about the basic soundness of our own banking system, which essentially upholds the universal banking model as a viable one.  By contrast, in his famous “dog and frisbee speech” delivered last August at Jackson Hole, Wyoming, Haldane suggested that: “Regulation of modern finance is almost certainly too complex. That configuration spells trouble… Because complexity generates uncertainty, it requires a regulatory response grounded in simplicity, not complexity.”

In contrast to Andy Haldane, Governor Carney  is comfortable with the “universal banking” model, so long as they have sufficient capital buffers and do not put taxpayers at risk.  Well, there are a number of things to be said in response to that.  For one, even though Canada’s banks are large within the context of the Canadian economy, their asset size is still relatively paltry in relation to, say, JPMorgan Chase.

Second, not wanting to put the taxpayers at risk sounds as all-American as baseball and apple pie, much as the new “safeguards” put in place to avoid taxpayer funded bailouts in Dodd-Frank sound great on paper. But in reality, we all know that absent effective anti-fraud regulators, there is only one “shock absorber” that can be used once the looters who head up these institutions have caused the catastrophic failure of an SDI. If Citigroup or, say, Barclays, is insolvent by $400 billion there is only one “shock absorber” that can reduce (1) cascade failures among the counterparties and (2) sending a shock throughout the financial system as investors and creditors realize that there is an enormous bubble (whatever bubble comes next), that asset values are grossly inflated, and that there is widespread fraud covering up losses at many banks. That shock absorber is money — massive amounts of money.

The reality, which politicians and now (it appears) regulators like Mr. Carney, like to assume away, is that most of this money will come from public funds. As long as banks are allowed to be so large that their failure can cause a crisis they will be bailed out. If, like Lehman, they are not bailed out their failure will cause so much damage that the subsequent SDI failures will be bailed out.  Hence, the calls by figures such as Andy Haldane to break up the larger banks – a proposal which also appeared to have the backing of current Bank of England Governor Mervyn King, but which appears to be running into opposition from both Mark Carney and the current UK Chancellor of the Exchequer, George Osborne, who indicated: “I want Britain to be the home of big successful banks.”

Carney is staking his credibility and reputation that Basel III – the third global regulatory effort in around two decades – is the world’s best bet to reduce the risk of another global financial meltdown. But in fact, it is loss of the basic simplicity in banking’s traditional credit intermediation role which has played a huge role in creating the odds of another financial Armageddon, even in Canada, the new golden boy as far as banking goes.

In contrast to the suggestions of Mr. Carney (and other Canadian politicians, such as Prime Minister Stephen Harper and his Finance Minister, Jim Flaherty), the Canadian banking system is not as sound as they would have you believe.  In fact, both the Canadian banking system and the economy as a whole display many of the pathologies of the US economy, in terms of its increasingly financialised character and the corresponding evolution of its banking system.  Consider the following chart (courtesy of Mario Seccareccia “Financialization and the Transformation of Commercial Banking: Understanding the Recent Canadian Experience before and during the International Financial Crisis”) 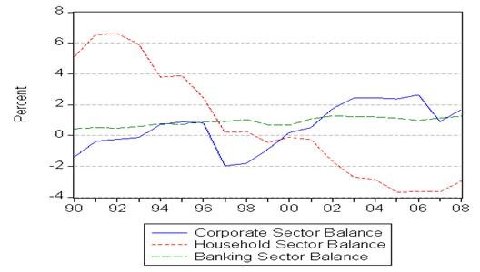 It has got worse since then. Although different in degree, the Canadian economy has become excessively financialised. The practical disappearance of household saving and the ever growing household indebtedness has fueled the expansion of speculative derivatives because of the demand arising from the growing savings of the non-financial corporate sector. As Seccareccia notes,

“owing to the corporate sector’s position as net lender, rentier speculative behaviour (that Keynes had so vehemently criticized in the General Theory) has slowly prevailed in the financial sector and has probably been the largest impetus in pushing this financialization frenzy into hyper drive over the last decade. It is, therefore, in large part due to the growing proportion of corporate saving that has been directed towards speculative ventures in a way that household and even, say, group pension funds would be less likely to do, because of legal restrictions imposed on portfolio managers regarding the risk structure of their portfolio of pension assets.“

The reality is that Canada’s banks were “saved by the bell”.  The regulatory apparatus established over many years and upheld during the Chretien/Martin Administrations, was gradually being dismantled by the Harper Government, when it came into power in 2006.  The traditional view of the Canadian banking industry is that there was a quid pro quo:  Canada’s banks were essentially given a protected and profitable oligopoly, the quid pro quo being that the banks would engage in less of the buccaneering type of activities of their US counterparts, if such a profitable environment for traditional banking activities was implicitly guaranteed.    Even with that implied guarantee, there were nonetheless sufficient incentives to engage in high stakes mortgaging of the type that resulted in the subprime crisis in the U.S.

According to industry statistics, in 2006 sub-prime mortgages accounted for less than 5 percent of overall outstanding Canadian mortgages, while in the U.S. this figure was 22 percent. However, the oil and commodity price boom and the resulting strong real estate market generated growing demand for looser mortgage lending.  Indeed, under pressures to deregulate further the financial markets (in the name of providing competitive financial services under NAFTA), the door was opened wide for the subprime market to move north in May 2006.

”This was so largely because of the lobbying effort of American International Group (AIG) that recruited the support of some former officials of the federally-owned Canada Mortgage and Housing Corporation (CMHC) who finally succeeded in persuading the federal cabinet to open Canada’s mortgage insurance sector to greater foreign competition.  Hence, in 2007 and early 2008, subprime mortgages were rising precipitously in Canada, despite the growing problems south of the border and despite even the formal opposition of the Governor of the Bank of Canada at the time, who feared possible inflationary consequences of this type of credit expansion in the hot Canadian housing market that could then spread to the overall product market, thereby possibly frustrating the Bank of Canada’s own low inflation targeting policy. In a sense, it was the U.S. financial collapse itself in 2008 that actually aborted the process, thereby preventing a home grown subprime problem in Canada. The fact that the federal government offered $125 billion through CMHC to buy up mortgage assets would suggest that there was, indeed, a significant number of such high risk mortgages in the banking sector that have slowly been absorbed by CMHC, a public institution, in 2009, much as Fannie Mae and Freddie Mac in the U.S.”

The upshot of all of this is that financial innovations, together with these economies of scale and unlimited securitization, was starting to transform the Canadian banking sector into what some have described as a giant “transaction generating machine” — a securitised model of credit that increases turnover of assets while increasing commissions, fees and bonuses via the trading of complex derivatives – much like its American counterparts.    Indeed, facilitated by deregulation, computerization and globalization, this process of financialization has brought about a complete transformation in the source of revenues for the banking sector in Canada.  As Seccareccia illustrates:

“From as much as 90 percent of total revenues being derived in the early 1990s from the traditional interest rate spreads related to their activities in making loans to creditworthy borrowers, by the 2000s this had gone down to less than 50 percent, with more and more of these bank revenues earned from commissions, administrative and user fees, and other forms of compensation unrelated to their traditional role in providing loans to the public.” (our emphasis)

This is the world of Basel III, which Mr. Carney looks set to uphold in his new role at the Bank of England and Chairman of the FSB.  It’s all very well to understand complex financial plumbing and make sure it runs with a minimum of leaks and plugs  But if the pipes are situated on top of a ticking time bomb, it’s not a skilled financial plumber one requires in a key regulatory position, but an architect with a broader vision required to redesign the entire structure which houses the plumbing.  As a supporter of a discredited model of financial intermediation, Mr. Carney, for all his market savvy, is yesterday’s man.  Andy Haldane deserves a fairer hearing.

Portugal and Ireland: Us Too, Please